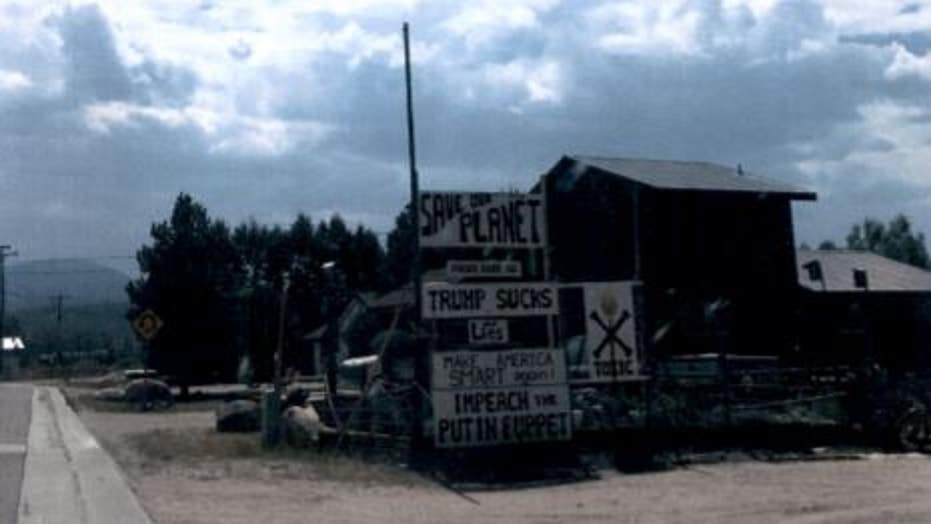 A Colorado town is being sued by the American Civil Liberties Union for alleged violation of free speech after it forced a couple to take down signs that were against President Trump and advocated for environmental activism.

The couple, Melinda McWilliams and Alan Jensen, first began putting the signs up in the front yard of their home in Fraser – about 70 miles west of Denver – in January 2017, according to the lawsuit.

A couple’s property in Fraser, Colo., was found to be in violation of the town’s sign code which allows for only one-yard sign per lot, no longer than 6 square feet.   (Jeff Durbin)

The signs contained the messages: “Trump sucks,” “Make (map of America) Smart Again,” “Save Our Planet: Humans Are Killing Earth,” and “Toxic Trump.”

In September 2018, the couple received a letter from Fraser’s town manager demanding that they remove the signs or face prosecution for violating the town’s sign code, which permits a single yard sign no bigger than 6 square feet.

McWilliams and Jensen subsequently proposed reworking the signs into works of art which would exempt them from the town’s sign code.

In a follow-up letter, all but one of their proposed signs were rejected. Town Manager Jeff Durbin told the couple that their proposed displays “would just attract more attention” — an argument McWilliams believed was a “content judgment,” Denver's KCNC-TV reported.

“Many people who liked my signs have asked me what happened to them,” Jensen said in an ACLU's press release. “I tell them the town forced me to remove them under the threat of fines, prosecution or jail.”

The ACLU of Colorado filed the lawsuit in U.S. District Court in Denver late last month, asking for damages and that Fraser’s code provisions be declared unconstitutional.

“Fraser’s sign code imposes drastic and unjustifiable limits on resident’s rights to express their views with messages posted on their own property,” Mark Silverstein, ACLU of Colorado’s legal direction, wrote in a press release, adding: “The town’s sign code is a content-based regulation of speech that violates the First Amendment.”

Durbin told Fox News that the town’s initial reaction was related to the “amount of signage” on the couple’s property, not the content.