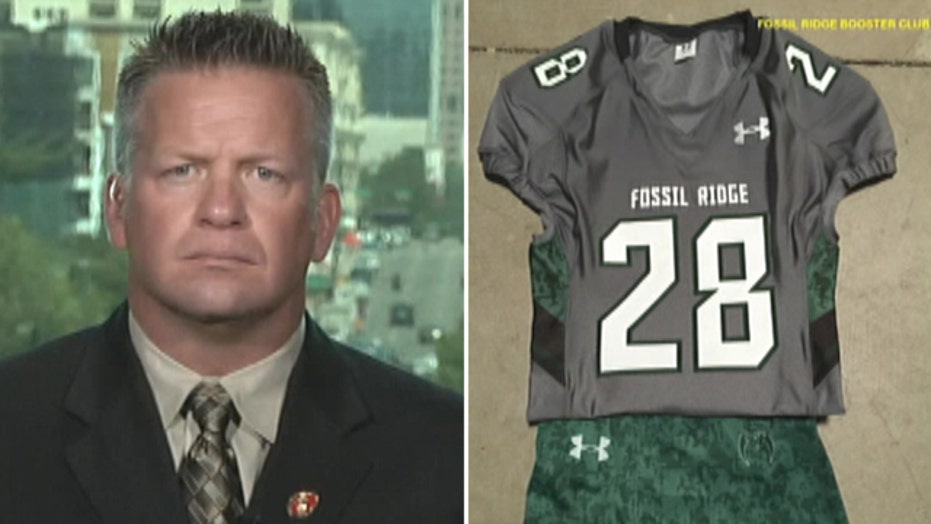 A school district in Colorado denied a high school football team's request to honor the military by wearing the names of fallen service members on the back of their jerseys, saying it would open the door to similar requests from other causes.

Lt. Col. Randy Russell, a veteran and parent of a student at Fossil Ridge High School in Fort Collins, Colo., spoke out Friday about the school district's decision.

"I don't see this as just another cause," Russell told FoxNews.com. "I see it as an opportunity to honor the very people that have provided us the freedom to have this very discussion."

The team's effort to honor the military extends back to June, when Coach Brian Tinker, together with Lt. Col. Russell, put together a "crucible experience" of crossfit and military-style workouts for the team. In addition, players were encouraged to research the fallen heroes they would be honoring.

"Ultimately, we culminated in a hike that took place Monday night," Russell said. "Throughout that hike, they had the opportunity to stand up and speak about their fallen hero and then we used that as a teaching point for the character and values that were demonstrated during the lives of those fallen heroes."

Russell put together a list of fallen service members that spanned many years and different places across the country. The names of the soldiers were to be worn on the back of players' jerseys in lieu of the students' names.

"We've received tremendous feedback from the kids in terms of the value that they've seen in what we're doing," Russell said. "This was a character development program that we felt like, through the football program, was an opportunity we could provide to make them better young men."

The Poudre School District said in a statement Friday that their decision to deny the request was two-fold: first, citing the National Federation of State High School Association's rule that only player and team names are allowed on game jerseys and two, that the district maintains the responsibility to determine what is added to official game jerseys.

The school district also said they could not comply with the team's request without giving other causes the same opportunity.

"Sometimes PSD has to deny a request to avoid unintended consequences, even when the request is in pursuit of a worthy cause. In this situation, a well-intended and passionate parent presented a select list of names of fallen heroes to be placed on the game jerseys," the school district said in a statement. "If the district allows someone else to make the decision about what is placed on game jerseys, legally the district may have to allow others to do the same in the future. Therefore, the request was denied."

"I think the important distinction for me is that they talk about that as a cause and I think, much like our flag, I do not see these names as just a cause. I see them as emblematic, and symbolic of our nation and the freedom that we have," Russell said.

While Russell disagrees with the district's decision to omit the names, he said he and the students are willing to work together to find an appropriate way to honor the military.

"They are very passionate and supportive of what we're doing and see the value in what we've done so far and would like to continue that effort."