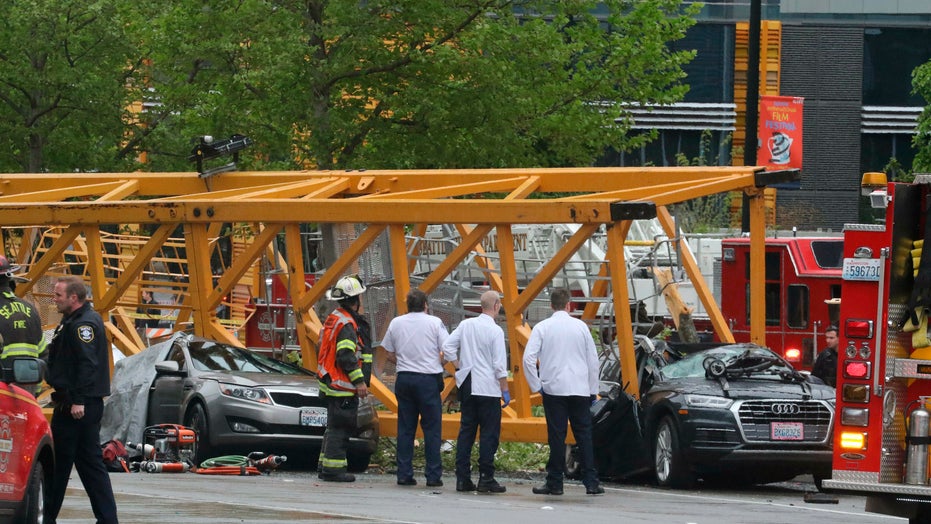 Four people were killed and multiple others hurt in Seattle on Saturday when a crane collapsed into traffic, officials said.

At least three people were hospitalized following the incident at Fairview Ave. N and Mercer Street, the Seattle Fire Department tweeted. Among them were a mother and her baby, Fire Chief Harold Scoggins said, according to the Associated Press.

WASHINGTON HOMEOWNER SHOOTS, KILLS BURGLARY SUSPECT WHILE ON THE PHONE WITH 911, POLICE SAY

Another person received care at the scene but was not transported, the fire department said.

The deceased included two ironworkers and two individuals who were in their vehicles at the time, according to Scoggins. Three were men and one was a woman.

The falling crane, which had been situated on top of a building, damaged multiple cars, the department said.

The falling crane, which had been situated on top of a building, damaged multiple cars, the department said. (Chelsea Oughton via AP)

Photos from the area showed multiple responders on scene, as well as several smashed vehicles. A photo shared by the fire department also showed damage to the top of a building.

It was not yet clear what caused the crane to fall, Scoggins said.

Gov. Jay Inslee tweeted that his team was "closely monitoring the situation" and expressed his condolences.

"My heart goes out to the family and friends of the four people who died in this terrible accident," he wrote. "Please stay clear of the scene and allow medical personnel and investigators to do their work."