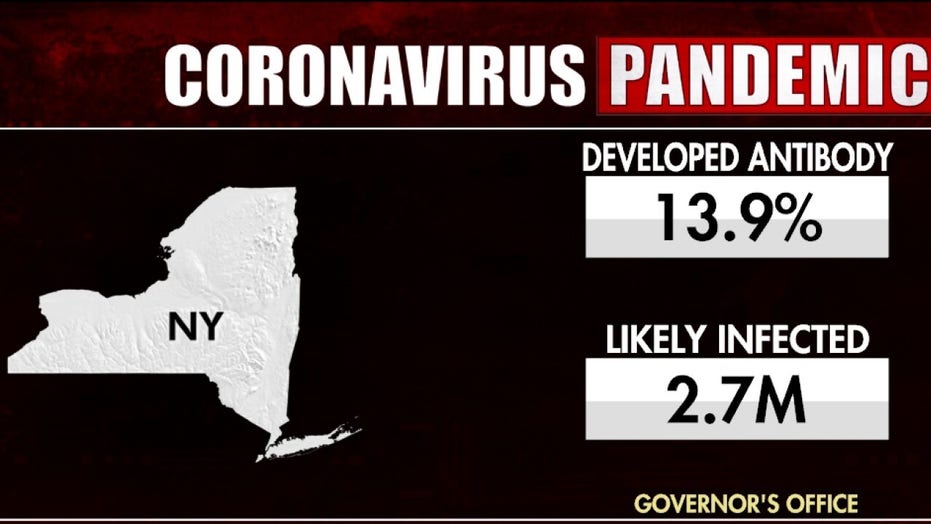 Fox News medical correspondent Dr. Marc Siegel weighs in on what this means for asymptomatic spread of coronavirus.

A coastal city in San Diego County is demanding that county officials return local control over its access to public spaces such as walking trails and beaches.

Encinitas, which is about 25 miles north of San Diego, made national headlines Sunday when a group of about 200 people gathered to protest the city’s closure of the Coastal Rail Trail and a portion of South Highway 101 to pedestrians amid the COVID-19 pandemic.

The city's closure of those public spaces came less than a week after the county's Health and Human Services Agency issued an order that prohibited the public from "swimming, surfing, paddleboarding, boating for recreational purposes and all other water recreational activities" at beaches.

City officials said its latest closures were done to comply with social distancing orders from the state of California and San Diego County. The restrictions allowed for residents to run or walk within their neighborhoods but “within the parameters of the current Orders.”

Demonstrators in Encinitas protesting against the city's closure of public spaces.  (Courtesy of Crista Anne Curtis)

Crista Anne Curtis, who organized Sunday's protest, said the city's new restrictions were frustrating because of the area’s lack of sidewalks and the trail being the only way to get around on foot.

"There were no new cases, Encinitas has only had 34 cases [of COVID-19]," she said. "It's clear what we've been doing has been working, and so I didn't understand why we needed to do even more."

“It is quite selfish for people to be completely violating stay-at-home orders,” Blakespear said. “People are sacrificing and really suffering. People are out of work, small businesses are closed… and health care workers are putting their own health at risk on the front lines.

“There is a way to exercise your First Amendment and freedom of assembly rights… while also maintaining distance from other people, wearing facial coverings and abiding by the social contract.”

She also criticized the protesters for, at one point during the day, showing up in front of her home, calling it an "invasion of my own privacy."

“It definitely frightened my children to have a hundred people taunting me to come out, trying to somehow engage me on a Sunday at my private home,” she said.

Fox News reached out to Blakespear with a request for comment.

The county's health order that closed public beaches is in place until April 30. But county officials have not said publicly whether they plan to lift restrictions at that time or extend the order.

Blakespear told The Coast News, a local paper, that any decision to lift restrictions will be made based on the recommendations of coastal mayors, city councilmembers, county health officials, law enforcement, local marine safety officers and lifeguards.

Meanwhile, the county sheriff’s office told Fox News its' investigators have submitted a case to the District Attorney’s Office recommending that Curtis be charged with a misdemeanor and fined up to $1,000 for supposedly violating the state’s stay-at-home order.

Similarly, Naomi Israel, a 27-year-old woman who organized another protest rally Saturday in downtown San Diego opposing the stay-at-home order, is also facing possible arrest and a misdemeanor charge that could result in 90 days in jail and a $1,000 fine.

Both women are now being represented by the Center for American Liberty, a conservative nonprofit that filed a lawsuit in federal court last week against California Gov. Gavin Newsom for prohibiting in-person church services.

Despite pressure to back down, Curtis has organized two follow-up rallies this weekend to demand that San Diego County allow the city to determine when it can open its own beaches and public walking spaces.

Curtis said she would consider postponing the protests if she believed hospitals “were overwhelmed, or even close to being overwhelmed.”

“That is not the case so we should continue to exercise our rights for as long as it is safe. If some protestors get sick for being outside … then we are in a perfect position right now, in San Diego county, to care for them,” she said. “If things do start to get worse, then I would reconsider future protests for a later date.”

Curtis’ assessment is shared by Janice Bidwell, a practicing nurse and clinical faculty member at San Diego State University who participated in Sunday’s rally and supports "stay-at-home" protests in states where COVID-19 cases are low. Bidwell told Fox News that the number of COVID-19 patients in intensive care units in San Diego -- compared with New York, for instance -- do not warrant restrive stay-at-home orders.

“[San Diego County] hospitals are furloughing nurses. Nurses are taking pay cuts. We have empty beds,” she said. “The hospitals are suffering severe financial losses from canceling all the elective surgeries. And while we've been waiting around for almost two months now and nothing's happened, and I think there's a high degree of frustration among health care workers.”

According to the latest figures from Johns Hopkins University, San Diego County -- which has around 3.4 million people -- has recorded at least 2,491 coronavirus cases, with 96 deaths. New York City alone, meanwhile, has recorded nearly 151,000 with more than 15,000 deaths.

“I think if I were in New York, I certainly would feel differently about my own personal safety and that of my family,” Bidwell said.

“Now, if you had a highly contagious disease or a crisis, a health care crisis in Venezuela, would you lock down New York City? I don't think so. I don't think so,” she said.