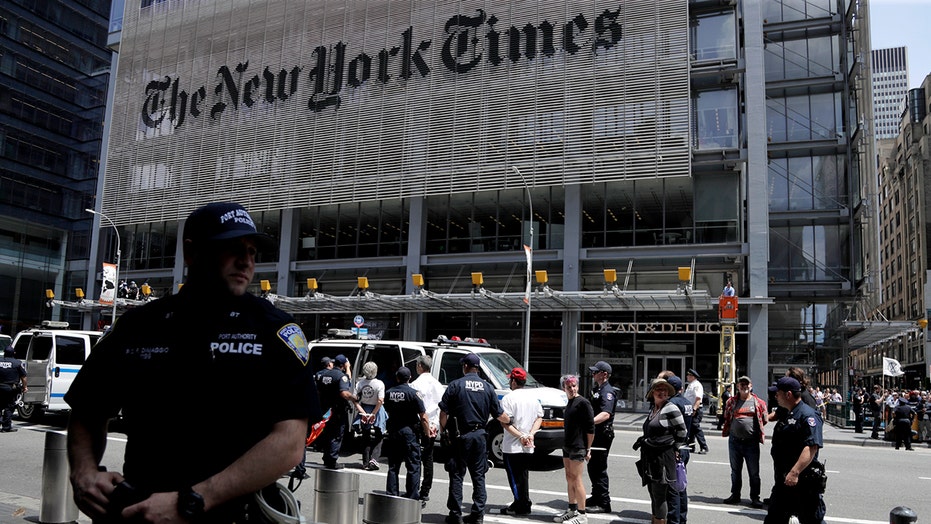 Police arrested 70 people outside of The New York Times building in Times Square on Saturday as they protested news coverage of climate change.

Protesters with the group "Extinction Rebellion" laid down on Eighth Avenue in Midtown Manhattan and disrupted traffic, leading to their arrests, officials said.

The demonstrators also hung banners on the building and on the Port Authority Bus Terminal, located across the street.

One protester told The Guardian she planned to be arrested because “we want The New York Times as well as all the other media to treat climate change as the crisis it is," while a spokesperson for the group told The Associated Press they want the media to report on "the climate emergency" so that "people can start pushing for more radical responses."

A spokesperson for the Times told Fox News on Sunday it disputed the characterization that they don't report on climate change.

A man rappels down the side of the Port Authority Building with a sign during a climate change rally on Saturday in New York City. (AP Photo/Julio Cortez)

“There is no national news organization that devotes more time, staff or resources to producing deeply reported coverage to help readers understand climate change than The New York Times," the spokesperson said. "In 2018, we published 795 articles about the climate, ranging from investigative stories about the rollback of environmental regulations to dispatches from around the world showing the on-the-ground effects of climate change"

Demonstrators with Extinction Rebellion, an environmental activist group, have been blocking traffic in an effort to protest climate change coverage around the world in recent months.

The group recently postponed a plan to shut down London's Heathrow Airport with drones after it was widely criticized by authorities.