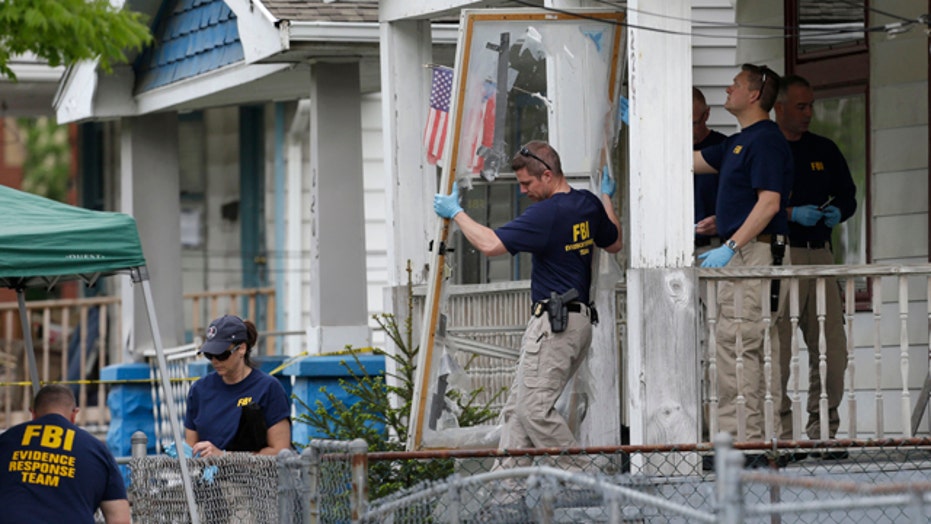 HOUSE OF HORROR: Why were the victims not found earlier?

CLEVELAND – Cleveland police are searching properties Wednesday morning near the home called a 'house of horrors' after they were reportedly alerted by one of the kidnap victims that there may be more women.

Details of a possible fourth victim came to light during police interviews with the oldest victim,  Michelle Knight, who reportedly said there was another girl at the home about 10 years ago, but she disappeared.

In 2007, Ashley Summers, a 14 year old, disappeared in the same neighborhood. Initially it was believed Summers was a runaway but a few years later, police saw a potential link with the other missing girls.

Knight reportedly told police she was unsure of how many other women may have been in the house because they were all kept in separate locked rooms.

Meanwhile, Amanda Berry, another woman police say was held captive in the home, arrived at her sister's Cleveland home. Her sister addressed the media formed outside the house and asked for privacy. In an apparent attempt to avoid the media, Berry entered the home through the backdoor.

The three brothers police say held Berry, Gina DeJesus and Michelle Knight, will be questioned by authorities Wednesday and likely be charged in the case. The three women were found captive Monday at the run-down house.

Metro Health Medical Center said Wednesday that Knight was in good condition at the hospital.

The suspects were identified as Ariel Castro, 52, who lived at the home, and his brothers, Pedro and Onil, ages 54 and 50, respectively. The brothers lived at another location, authorities said.

Ariel Castro owned the home, which is situated in a poor neighborhood dotted with boarded-up houses just south of downtown. No charges were filed.

Grimilda Figueroa, the mother of Ariel Castro's children, filed allegations of abuse and was issued a court order of protection in 2005.

Figueroa stated in a complaint that she suffered a broken nose twice, broken ribs, dislocated shoulder and Ariel Castro threatened to kill her and her daughter. She also claimed that he "frequently abducts daughters and keeps them from mother/leagal custodian."

A relative of the three brothers said their family was "totally shocked" after hearing about the missing women being found at the home.

Juan Alicea said the arrests of his wife's brothers had left relatives "as blindsided as anyone else" in their community. He said he hadn't been to the home of his brother-in-law Ariel Castro since the early 1990s but had eaten dinner with Castro at a different brother's house shortly before the arrests were made Monday.

A 6-year-old girl believed to be Berry's daughter also was found in the home, police Deputy Chief Ed Tomba said. He would not say who the father was.

The women were reported by police to be in good health and were reunited with joyous family members but remained in seclusion.

In eastern Tennessee, Berry's father, Johnny Berry, told WJHL-TV that he spoke to her for the first time Monday night by phone at his home in Elizabethton.

Although Amanda Berry was born and raised in Cleveland, her father, grandparents and cousins live in Elizabethton. Before she disappeared, she often visited Tennessee during the summers. Family members said they visited her in Cleveland about three weeks before she went missing.

The head of the FBI in Cleveland, Stephen Anthony, said the families' prayers for the missing women had been answered.

"The nightmare is over," he said. "These three young ladies have provided us with the ultimate definition of survival and perseverance. The healing can now begin."

He added: "Words can't describe the emotions being felt by all. Yes, law enforcement professionals do cry."

Cleveland's police chief Michael McGrath says the women were held captive in a house for nearly a decade were restrained with ropes and chains and allowed out into the back yard occasionally.

McGrath says he was "absolutely" sure police did everything they could to find the women over the years. He disputed claims by neighbors that officers had been called to the house before for suspicious circumstances.

McGrath says the three men who have been arrested in the case "are talking" but he wouldn't say if they have confessed. Investigators who searched the property said no human remains were found.

Police sources tell the FOX 8 that they found a letter written by Ariel Castro inside his home detailing his involvement with the three women.

The letter is one of several items police now have as evidence. They have also confiscated ropes and chains that were in the house.

Four years ago, in another poverty-stricken part of town, police were heavily criticized following the discovery of 11 women's bodies in the home and backyard of Anthony Sowell, who was later convicted of murder and sentenced to death.

The families of Sowell's victims accused police of failing to properly investigate the disappearances because most of the women were addicted to drugs and poor. For months, the stench of death hung over the house, but it was blamed on a sausage factory next door.

In the wake of public outrage over the killings, a panel formed by the mayor recommended an overhaul of the city's handling of missing-person and sex crime investigations.

This time, two neighbors said they called police to the Castro house on separate occasions.

Elsie Cintron, who lives three houses away, said her daughter saw a naked woman crawling in the backyard several years ago and called police. "But they didn't take it seriously," she said.

Another neighbor, Israel Lugo, said he heard pounding on some of the doors of the house in November 2011. Lugo said officers knocked on the front door, but no one answered. "They walked to side of the house and then left," he said.

"Everyone in the neighborhood did what they had to do," said Lupe Collins, who is close to relatives of the women. "The police didn't do their job."

Police did go to the house twice in the past 15 years, but not in connection with the women's disappearance, officials said.

In 2000, before the women vanished, Castro reported a fight in the street, but no arrests were made, Flask said.

In 2004, officers went to the home after child welfare officials alerted them that Castro had apparently left a child unattended on a bus, Flask said. No one answered the door, according to Flask. Ultimately, police determined there was no criminal intent on his part, he said.

Castro was arrested two days after Christmas in 1993 on a domestic-violence charge and spent three days in jail before he was released on bond. The case was presented to a grand jury, but no indictment was returned, according to court documents, which don't detail the allegations. It's unclear who brought the charge against Castro, who was living at the home from which the women escaped Monday.

Castro, 52, was well known in the mainly Puerto Rican neighborhood.

He played bass guitar in salsa and merengue bands. He gave children rides on his motorcycle and joined others at a candlelight vigil to remember two of the missing girls, neighbors said. They also said they would sometimes see him walking a little girl to a neighborhood playground.

Tito DeJesus, an uncle of Gina DeJesus, played in bands with Castro over the last 20 years. He recalled visiting Castro's house but never noticed anything out of the ordinary, saying it had very little furniture and was filled with musical instruments.

"I had no clue, no clue whatsoever that this happened," he said.

Also arrested were Castro's brothers Pedro Castro, 54, and Onil Castro, 50. Calls to the jail went unanswered, and there was no response to interview requests sent to police, the jail and city officials.

Ariel Castro's son, Anthony Castro, said in an interview with London's Daily Mail newspaper that he now speaks with his father just a few times a year and seldom visited his house. He said on his last visit, two weeks ago, his father wouldn't let him inside.

Anthony Castro, who lives in Columbus, also wrote an article for a community newspaper in Cleveland about the disappearance of Gina DeJesus just weeks after she went missing, when he was a college journalism student.

"That I wrote about this nearly 10 years ago -- to find out that it is now so close to my family -- it's unspeakable," he told The Plain Dealer newspaper.

On Tuesday, a sign hung on a fence decorated with dozens of balloons outside the home of DeJesus' parents read "Welcome Home Gina." Her aunt Sandra Ruiz said her niece had an emotional reunion with family members.

Many of the women's loved ones and friends had held out hope of seeing them again,

For years, Berry's mother kept her room exactly as it was, said Tina Miller, a cousin. When magazines addressed to Berry arrived, they were piled in the room alongside presents for birthdays and Christmases she missed. Berry's mother died in 2006.

Just over a month ago, Miller attended a vigil marking the 10th anniversary of Berry's disappearance.

Over the past decade or so, investigators twice dug up backyards looking for Berry and continued to receive tips about her and DeJesus every few months, even in recent years. The disappearance of the two girls was profiled on TV's "America's Most Wanted" in 2005. Few leads ever came in about Knight.

Knight vanished at age 20 in 2002. Berry disappeared at 16 in 2003, when she called her sister to say she was getting a ride home from her job at a Burger King. About a year later, DeJesus vanished at 14 on her way home from school.

Jessica Aponce said she walked home with DeJesus the day the teenager disappeared.

"She called her mom and told her mom she was on her way home and that's the last time I seen her," Aponce said. "I just can't wait to see her. I'm just so happy she's alive. It's been so many years that everybody thinking she was dead."

Elizabeth Smart and Jaycee Dugard, who were held captive by abductors at a young age, said they were elated by the women's rescue.

"We need to have constant vigilance, constantly keep our eyes open and ears open because miracles do happen," Smart said on ABC's "Good Morning America."

The National Center for Missing & Exploited Children's CEO, John Ryan, said Berry, DeJesus and Knight likely would be honored by his group.

"I think they're going to be at the top of the list," he said.