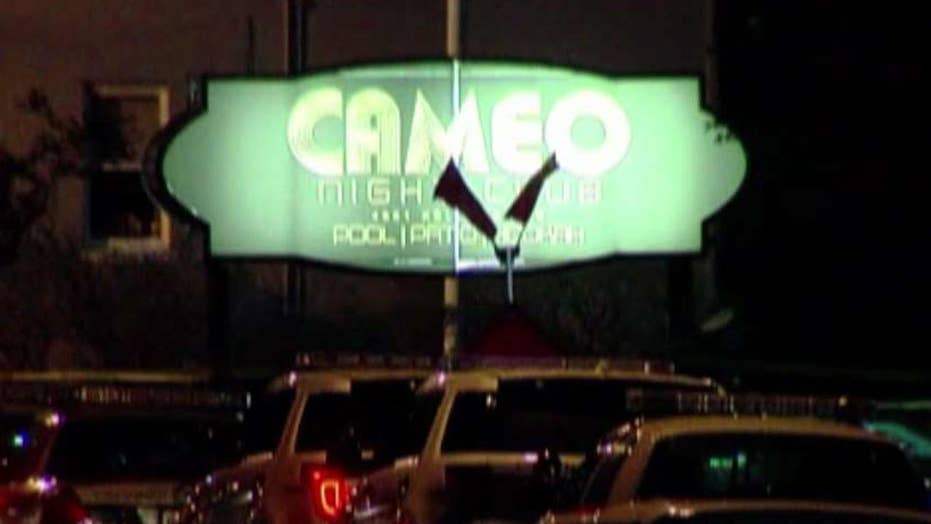 The shooters escaped the melee at club Cameo and they remained on the run Sunday.

"Several local men got into some type of dispute inside the bar and it escalated into shots being fired from several individuals," Cincinnati Police Chief Eliot Isaac said during a Sunday news conference. "As a result there were 16 people that sustained gunshot injuries one of which is deceased. A total of 15 others that were injured, one in extremely critical condition."

The man who was killed was named as 27-year-old Obryan Spikes. His family had been notified, Isaac said.

"I'm confident that while our hearts are broken, that our spirit is not," Cincinnati Mayor John Cranley said.

The nightclub employed off-duty police officers to patrol the parking lot, Isaac said, and individuals entering the club were routinely patted down and wanded. Despite the precautions, Isaac said "Several firearms were able to be brought inside the bar."

The motive for the shooting remained unclear, but Assistant Police Chief Paul Neudigate said there was no indication the attack was terrorism related. The shooting occurred around 1:30 a.m., WLWT reported.

“We are in the middle of a very horrific situation that occurred at the nightclub with multiple victims,” Neudigate said. “It’s going to be a long night for our homicide units to investigate.”

The victims were taken to four area hospitals. Some drove themselves and others were taken by ambulance. WLWT reported at least one of the wounded was in critical condition at a hospital.

Capt. Kim Williams said authorities were not sure what prompted the shooting.

"Saturday night, it is a very young crowd," Williams said. "We have had incidents here in the past, but this is by far the worst."

Several officers were working security detail at the club and performed first aid and tried to revive the person that died, Williams said.

"The biggest problem when you have a large crowd like this and the shots ring out, a lot of the witnesses disappear," Williams said.

Police are interviewing witnesses and asking anyone with information to come forward, however, authorities didn't immediately identify any suspects.

The area is mostly industrial but also home to several nightclubs with a smattering of private houses. A regional airport is nearby along the Ohio River. The area is fairly desolate at night, with the exception of the nightlife scene and 24-hour gas stations. The road where the club sits was easily cordoned off by a single police cruiser and officer at either end.

Ohio Gov. John Kasich said on Twitter that he was "saddened to learn about last night's shooting" and that he was offering the state's assistance.

Cameo's Facebook profile said it caters to college students on Friday nights, when anyone over 18 is allowed in, while Saturdays are "grown and sexy night" for ages 21 and over.