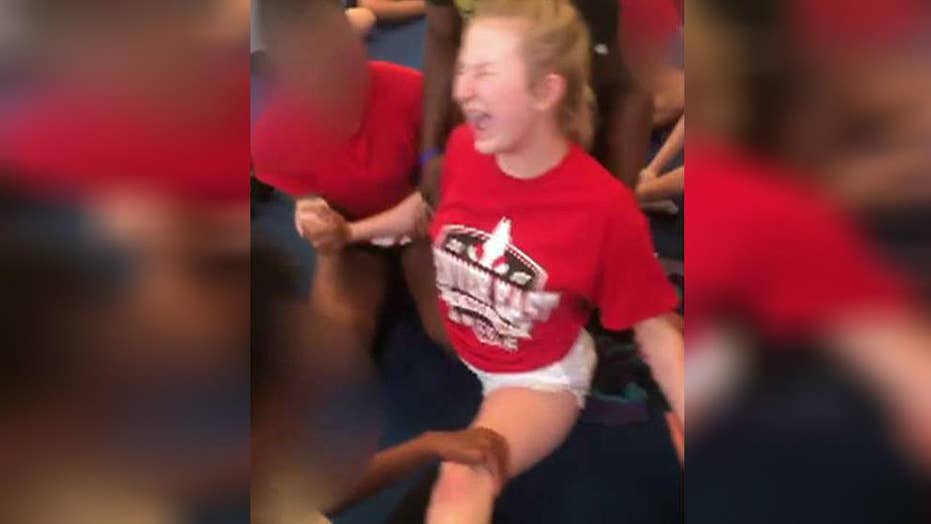 A number of coaches and school administrators in a Colorado district have been placed on leave after a series of disturbing videos showing young cheerleaders screaming in pain while being pushed into splits during practice was sent to police.

Denver Police are investigating the videos showing eight cheerleaders at Denver’s East High School repeatedly being pushed into splits while their arms were held up by teammates, according to 9 News.

The station said the videos were shot on the phones of two team members and were sent anonymously to the station.

DRIVER, 13, IN COLORADO CAUGHT WITH 25 POUNDS OF METH IN TRAFFIC STOP, POLICE SAY

In one video obtained by 9 News, incoming freshman Ally Wakefield was screaming in pain while her legs and arms were being pushed down by teammates and the cheerleading coach, Ozell Williams. Wakefield repeatedly yells, “please stop.”

Williams was placed on leave, but he was slated to begin his first year as a coach at the school.

Ally’s mother, Kristen, wrote an email to the school’s athletic director Lisa Porter in June regarding a video of the forced split.

“I have attached a video of the forced splits she and her other team members were forced to do at cheerleading camp and practices; unless they had a doctor's note. This is how Ally injured her leg,” Wakefield wrote.

COLORADO MOM DIES TRYING TO SAVE SON WHILE TUBING IN CREEK

“My husband and I would like to know what the administration is going to do about my daughter's injury and how it happened,” the email said.

A number of parents have reportedly made complaints to the school about the coach and the administrators for months, according to 9 News. Police said they have launched an investigation Wednesday into the incident.

Denver Public Schools Superintendent Tom Boasberg called the videos "extremely distressing." He said the school's principal and an assistant principal, the cheer coach and his assistant and a district lawyer have been placed on leave during the investigation. Boasberg said in a statement to News 9 that he was not aware of the forced splits until the videos were brought to his attention.

“With regards to certain videos, I cannot state strongly enough – as the superintendent of the school district and as the father of two high school-aged daughters -- that the images and actions depicted are extremely distressing and absolutely contrary to our core values as a public school community,” Boasberg said in his statement.