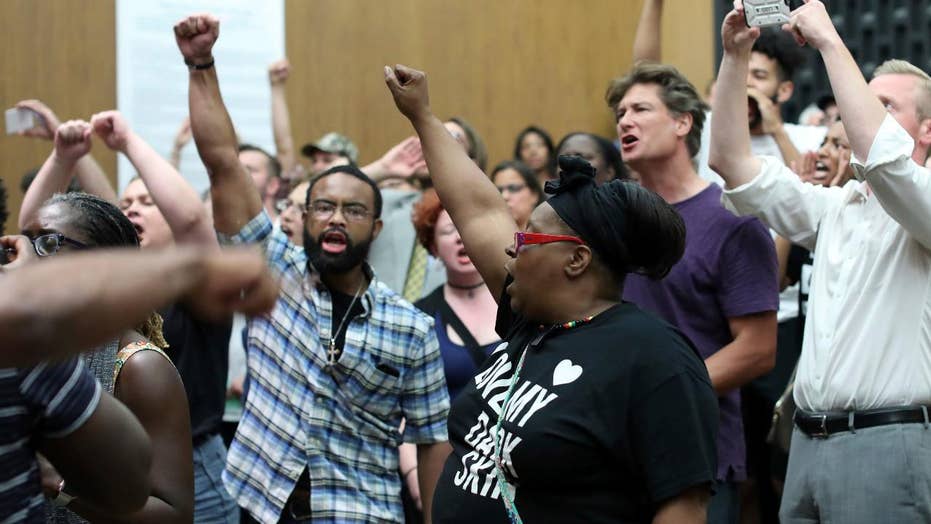 Following a deadly vehicle ramming at a demonstration against white nationalists earlier this month, the city of Charlottesville is set to cover controversial statues of Confederate generals in black fabric, city officials said.

The city council voted unanimously early Tuesday to shroud the statues of Gens. Robert E. Lee and Thomas "Stonewall" Jackson in fabric to represent mourning of Heather Heyer, the 32-year-old woman killed when a car rammed into a group of people protesting a white nationalist rally in the Virginia city, the Daily Progress reported.

The vote comes only hours after tensions boiled over at the first city council meeting since rallies on Aug. 11 and 12 that were organized by white nationalist elements. Heyer was killed during a demonstration against the rally on the second day.

Monday night’s meeting began with thick tension that quickly erupted when the “Unite the Right” rally was mentioned. Angry residents called into question the city’s and police department’s responses to the deadly rally.

Charlottesville Mayor Mike Signer, who seemed to take the brunt of the assembled crowd's ire, was interrupted several times in just the first few minutes of the meeting by residents shouting, with some calling for his resignation.

Protests and interruptions continued to escalate. At one point, police had to forcibly remove three people. The trio received summons' and were charged with disorderly conduct.

A live video shows two people standing up on the dais and pulling out a large banner with the words: "Blood on your hands!" At this point Signer suspended the meeting while he and other council members left the room, the New York Times reported.

“Why did you think you can walk in here and do a business-as-usual meeting after what happened on the twelfth?” Nikuyah Walker, who is candidate for city council, asked, according to the Daily Progress.

Vice Mayor Wes Bellamy, the only African-American on the council, was the sole member to remain, and he negotiated with angry residents to restore order in exchange for scrapping the rest of the meeting’s agenda to allow people to speak.

After the meeting was resumed, white and black residents called into question the city’s decision to let the white supremacist rally take place, and faulted the police department for its perceived inaction during repeated clashes.

In the end, city officials unanimously voted to take the first administrative steps to remove the statue of Confederate general Stonewall Jackson.

It was the city’s decision earlier this year to remove a statue of Robert E. Lee that prompted the August rallies.

Earlier Monday, the man who authorities say drove his car into the crowd of counter-protesters Aug. 12 made a second court appearance. The Charlottesville Commonwealth's Attorney's Office said James Alex Fields Jr., 20, appeared by video Monday. It was his first hearing on a second set of charges filed against him last week.

Senior assistant Commonwealth's Attorney Nina Antony said a judge declined for now to set bond for Fields, who has another hearing Friday. The charges against Fields include second-degree murder. In addition to the death of 32-year-old Heather Heyer, police said some of the 19 people injured when the crowd was rammed by the car suffered serious and permanent injuries.