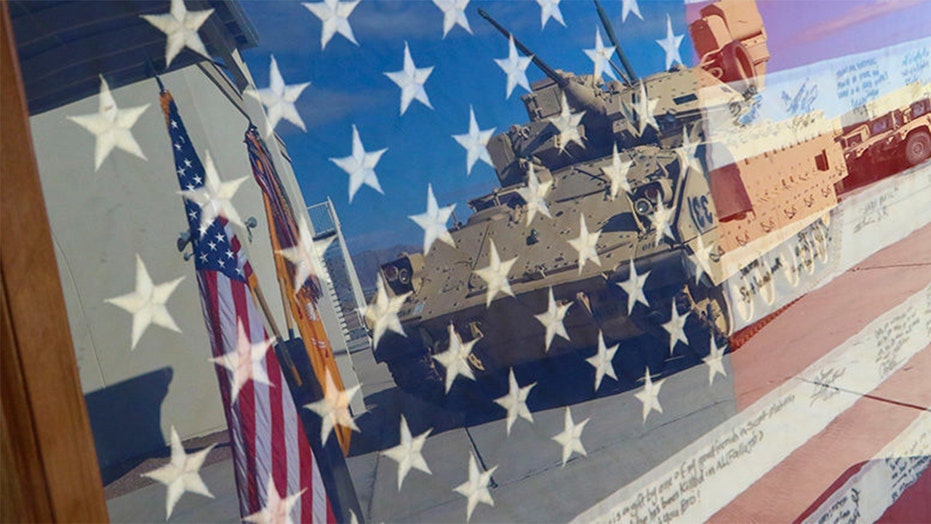 It became a simple yet nearly unthinkable mission: Recover a precious American flag buried in the dirt somewhere in Iraq.

For Staff Sgt. Ahmed, that flag is so much more than mere stars and stripes.

Ahmed, whose name has been changed to protect his identity, served as an Iraqi translator during the early years of the Iraq War. After becoming one of the 1st Battalion "Bandits," 37 Armored Brigade, 2nd Armored Brigade Combat Team's most trusted and valuable linguists, the soldiers decided they wanted to give him an American flag in 2004.

"I was so excited and happy," Ahmed recently told Fox News. "It was the first American flag I had ever touched. It was one of those happy moments."

Ahmed began translating for the Americans in April 2003 in Baghdad. He worked for the 1-37's command team during local meetings and on missions.

He says he earned his team's trust one night on a mission beyond the fence when he rounded a corner and walked into the muzzle of an AK-47. He immediately put up his hand to push the muzzle away, and the Iraqi squeezed off a shot before running into the bushes, Ahmed recalled.

The American soldiers saw him differently after that night and realized how valuable he was to them, Ahmed said. "I became the guy who was about to be killed and would have died."

After that, he started to accompany the team everywhere.

One day in 2004, the team went on its last mission before being sent to a different location outside Baghdad. A soldier with whom Ahmed had become best friends, Sgt. Scott Larson, was killed.

"I was really devastated," Ahmed said. "He was a good friend of mine."

'ALMOST IMPOSSIBLE MISSION': THE 8,000-MILE NONSTOP FLIGHT TO SAVE A US SOLDIER'S LIFE

It had been Larson's idea to give Ahmed an American flag, the soldier recalled. The team signed the flag for Ahmed and left, and the Iraqi continued to translate for the U.S. into 2005.

Ahmed kept his flag in heavy-duty plastic bags, still carefully folded exactly as the Americans had given it to him, tucked into a Nike gym bag.

"I put it in those bags to protect it from the dirt and keep it white," he explained.

When he switched bases, he was supposed to leave behind all associations with Americans or sources.

He kept the flag.

Ahmed took it with him when he left the base for the last time. He was dressed in a disguise so that he wouldn't be recognized. The minivan taking Ahmed south to Baghdad approached an armed checkpoint. Guards would likely grill him about his associations with the Americans -- especially if they saw the flag.

"My brain was fight-or-flight, thinking I'm about to get killed because I have an American flag in my hand," he said.

Ahmed told the driver he wanted to get out near a residential area instead. Ahmed crossed the busy freeway and looked around. The guards were busy interrogating the van he had just exited and hadn't seen him.

At that moment, he decided to bury the flag.

He looked for a landmark that wouldn't move over time and saw a telephone pole. Then he picked a distinctive house, which he assumed was home to a local leader or dignitary.

"This guy isn't going to move, I thought. He had a very big house," Ahmed explained.

STRANGERS PACK FUNERAL FOR VETERAN WITH NO KNOWN FAMILY, FRIENDS: 'HE WILL NOT BE ALONE'

He picked a spot in the ground a few feet from the telephone pole, found a rusty flattened can and started digging.

He tightened the straps on the gym bag "and buried everything. I was worried I would get caught," he said.

"If they had come over, they would have seen me. I was worried other people in the neighborhood would see me," Ahmed said. "At that time, if you're digging a hole, you don't look good. You were either planting something bad or you were trying to attack someone."

With that, he left the flag that had meant so much to him, got into another van and "continued with my life," as Ahmed tells it.

He came to the United States in 2008, where he took the oath of enlistment to support and defend the Constitution and became an American soldier.

Ahmed, now 37, lives with his wife and child in California and serves in the Active Guard Reserve.

"Now is the time for me to say all of this because I have only two years in the Army left," Ahmed told Fox News. "I want every soldier to take pride in what they have, every person in the U.S., I want them to take pride in how they honor those who served before them, those who serve right now and those who lost their lives, regardless of their personal views of the war."

In 2016, his parents wanted to visit the U.S. and witness the birth of his child.

"My dad asked me, 'What do you want?' I really wanted only one thing," Ahmed said -- for his father to retrieve the American flag, 11 years after he'd tucked it away underground.

He gave his father specific instructions on where to find something buried -- not mentioning it was an American flag until his father found the bag and was safely home.

It took several trips to the residential neighborhood in the early-morning hours to locate the pole, find the house, then pinpoint the spot where the flag had been hidden.

On one fateful trip, his father was on the phone with Ahmed when he found something.

"I told him to hang up, get [the bag out of the ground] and get out. He opened it and said it was an American flag," Ahmed recalled.

This skyline of downtown Baghdad with rooftops and terraces is a very typical urban view seen all over the Middle East.

"My dad made fun of me in the beginning," he said. "They thought I buried a gold brick."

"They were proud of me, and I was proud of him to do such a courageous thing," the soldier said.

More than 11 years and 7,474 miles later, Ahmed was able to hold his prized banner again. It was unstained -- still "white as new."

That was 15 years ago. He still recalls details from his time with the Americans during the early years of the war: All those times in the field, all those times we went on missions, I felt my role as a linguist was to bring those cultures closer to each other."

The flag represents that, and much more.

"Every signature on that flag -- it means something to me," Ahmed said.

Holding the flag again was an accomplishment, he added.

"All of my accomplishment is in that flag. The relationship, the camaraderie, the hard work we put in together."

On Sept. 11, Ahmed visited the 1-37 Bandits at Fort Bliss in Texas, his framed flag in tow, and he spoke to soldiers.

"The flag finally made it home,” Ahmed told the Defense Department after the trip. “I think of these soldiers every day when I put on my Army uniform and display the flag on my shoulder. Today, I did not see faces and ranks, but as I looked around, I saw the Old Ironsides patch and friendships that will last a lifetime."

"Larson did not live to see his flag again, but these soldiers did.”