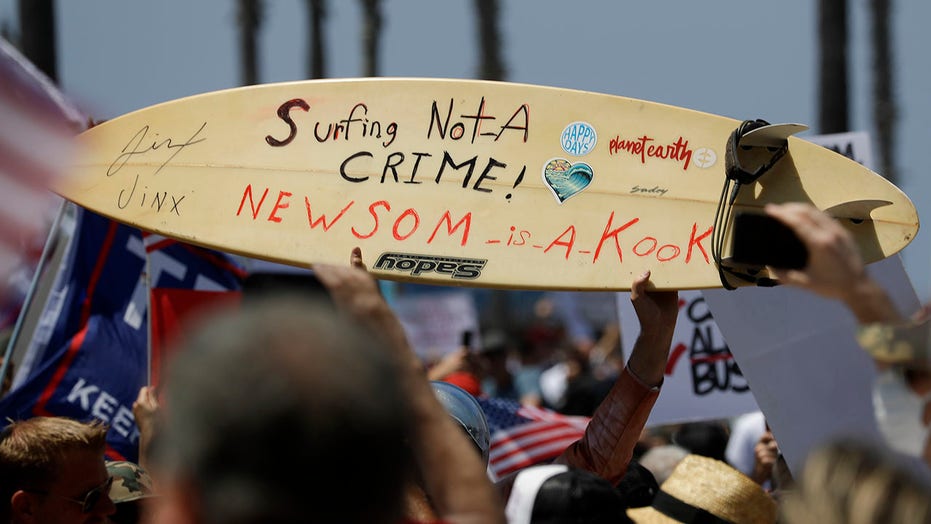 Portions of Southern California are reopening this week following weeks of government coronavirus restrictions that shut them down in an effort to slow the virus’ spread.

Certain businesses and outdoor areas in Los Angeles County will be allowed to reopen as soon as Friday, and state authorities have agreed to let beaches in Orange County reopen, as well.

Golf courses, car dealers and outdoor trails can reopen at the end of the week with social distancing safeguards in place, LA County officials announced Wednesday.

FILE - In this May 3, 2020 file photo people walk past a closed off beach, in Laguna Beach, Calif. Orange County's beachfront communities have submitted plans to reopen their beaches that adhere to California Gov. Gavin Newsom's stay-at-home order, the California Natural Resources Agency said in a statement. (AP Photo/Marcio Jose Sanchez,File)

Some retailers will be allowed to reopen for curbside pickup. They include stores that sell clothing, toys, sporting goods and music, Fox 11 Los Angeles reported. Notably, pro shops located at golf courses cannot reopen yet.

Additionally, further restrictions on retailers, manufacturers and some recreational facilities will be lifted later next week, according to a county press release explaining LA’s five-step reopening plan.

Separately, the state is easing its shutdown of Orange County beaches implemented by Gov. Gavin Newsom over the weekend, according to the Los Angeles Times.

“Active recreation” excludes sunbathing, according to the report. The beaches will reopen for limited hours with various other restrictions in place for the time being.

Last Friday, amid nearly 100-degree temperatures, tens of thousands of people flocked to Southern California beaches despite the coronavirus shutdown. But after concerns arose that many of the beachgoers had come to Orange County from Los Angeles or San Diego, Newsom intervened.

He specifically invoked scenes from the packed waterfront in Newport Beach.

“You didn’t see those images at L.A. beaches and San Diego beaches and [in] Northern California… because we had strong guidelines that were not only adopted but were abided by," he told the LA Times Monday.

Four men sit behind a sign that reads, "no stopping, no sitting," on a beach closed to stopping, sitting or lying down Wednesday, May 6, 2020, in San Diego. (AP Photo/Gregory Bull)

The move prompted protests against both the beach closures and the broader shutdown of the economy.

The latest guidelines have an eye toward reopening. The next three stages potentially will include movie theaters and schools, which are “higher-risk businesses,” LA County officials said.

There were at least 28,644 confirmed coronavirus cases across LA County and 1,367 deaths as of Wednesday, according to local authorities. Ninety-two percent of the fatalities involved people who had underlying health conditions.

According to the California Department of Public Health, there are more than 58,000 confirmed cases and over 2,400 deaths from coronavirus statewide.