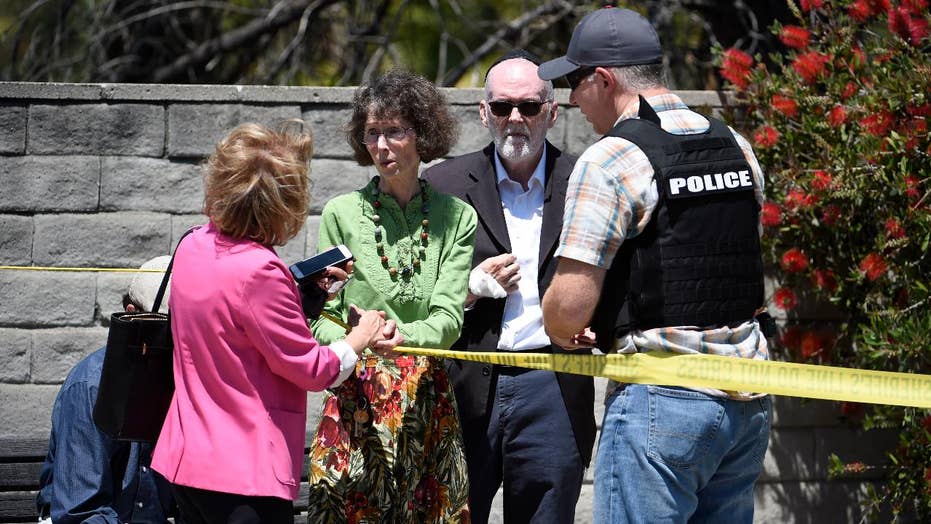 Poway, California synagogue shooting eyewitness: You saw the hate and you saw the murder in his eyes

A 19-year-old man has been charged with one count of murder and three counts of attempted murder in the Poway, California synagogue shooting.

A doctor who began CPR on the woman killed in Saturday's shooting at a Southern California synagogue fainted when he realized that the person he was trying to save was his wife.

Lori Gilbert-Kaye, 60, died of injuries she sustained in the shooting at Chabad of Poway near San Diego. Three others were hurt.

Gilbert-Kaye is believed to have thrown herself in front of Rabbi Yisroel Goldstein, possibly saving his life. Goldstein was injured after suffering a gunshot wound to his hand.

The San Diego Union-Tribune reports that Gilbert-Kaye’s husband, a physician, was in the synagogue when the gunshots started.

Lori Gilbert-Kaye, 60, who was shot and killed in Saturday's Southern California synagogue shooting, is believed to have thrown herself in front a rabbi, possibly saving his life.  (Facebook)

Worshippers called to him to help victims and he began to do CPR on one until he realized it was his wife, Dr. Roneet Lev told the paper.

The husband then fainted.

Lev said Gilbert-Kaye had gone to the synagogue near San Diego to offer the Jewish prayer for the dead -- known as the "Kaddish" for her mother, who recently passed away, the paper reported.

“God picked her to die to send a message because she’s such an incredible person,” Lev said. “He took her for a higher purpose to send this message to fight anti-Semitism.”

John Earnest, 19, was arrested after the shooting. Police say he burst in and opened fire with “an AR-type weapon."

An online manifesto written by a person identifying himself as Earnest says he was inspired by the mass shooting at two New Zealand mosque that killed 50 Muslims last month.