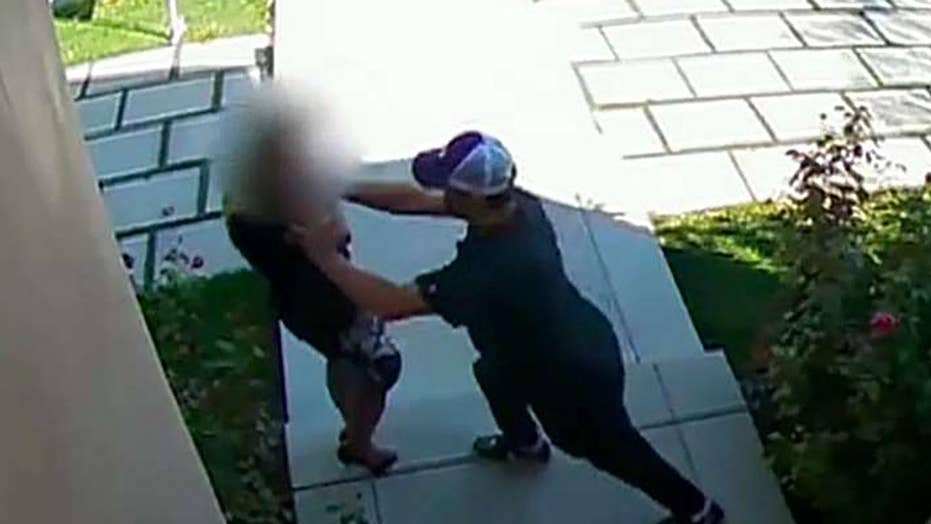 An open house in Southern California turned into a fight for her life for a real estate agent, who was violently attacked and groped in an assault that was captured on video.

"I could have been dead yesterday," the 51-year-old woman told FOX11 of the Sunday incident in the Los Angeles neighborhood of Encino.

The woman, who asked that her name be withheld, said the man who attacked her had come to her open house the previous week and was acting very strangely and inappropriately.

"I said, 'What are you doing here,' and he said, 'I have a buyer for you," she told FOX11. "At that point I was kind of nervous and I was a little bit shaky so I said OK we're in the middle of the house right now, I want to get him outside by the door," she continued.

The realtor said she then brought the man outside to the front porch, in view of the home's surveillance video. There she said the man began asking her to look at the bedroom and that's when she asked him to leave.

The man glanced at the camera multiple times before attacking the real estate agent on Sunday.

The man glanced up at the camera multiple times, then went to shake the realtor's hand with some final small talk.

The woman's screams were enough to eventually scare the man off. The realtor, however, said she's still traumatized by the encounter.

The realtor was violently attacked on Sunday at an open house in Encino.

"I see him all the time, he's in front of me, I didn't sleep last night, he's like, I can see his eyes, I can see him looking at me," she said. "I can see how he can attack me, it's like a movie playing and playing and I can't get it to stop."

The attacker is described as being in his mid-40's, cross-eyed with a bump on his scalp, according to the realtor.

Anyone with information is asked to contact the Los Angeles Police Department at 877-527-3247. Tips may also be submitted anonymously to L.A. Regional Crime Stoppers online or at 800-222-8477.