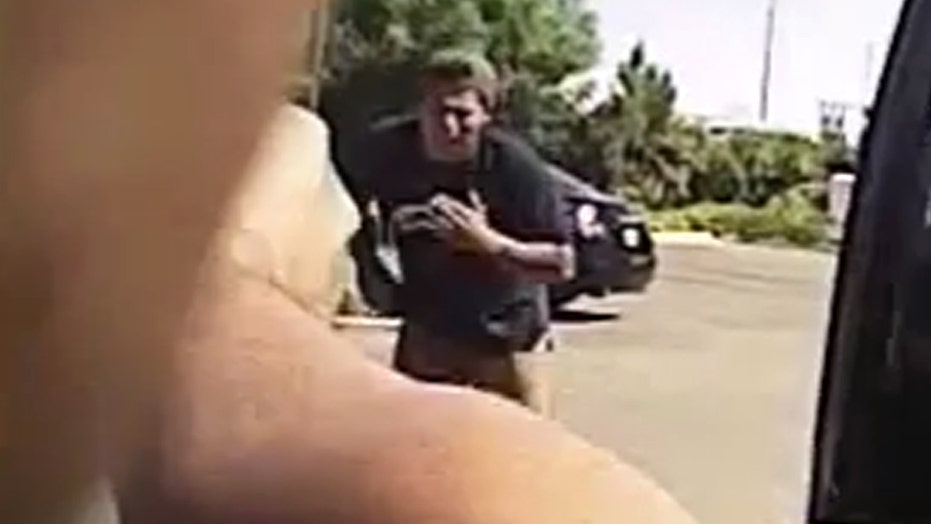 At a news conference, Chief Jerry Dyer acknowledged the video is gruesome, but he said it was important for the public to see. He said he prays it won't spark violence amid simmering anti-police sentiment in Fresno and elsewhere.

"Tensions are high," Dyer said. "In some cases we are one spark away from a forest fire. And I pray this video doesn't serve as that spark ... This is not a time to become violent."

The June 25 video shows officers, who were looking for a man with a rifle, pulling over Dylan Noble, who got out of his truck and walked away from and then toward two officers.

He didn't comply with commands, and then he is heard saying he hates his life. One officer fired twice with a pistol. Noble fell and was shot again on the ground as he moved his arms. An officer fired a fourth shot with a shotgun.

Dyer said officers believed Noble was reaching for a weapon, but it turned out he was holding a small plastic box.

The video was shown last week to Noble's father and stepfather. His mother, who declined to watch the videos, is seeking damages from the city for her son's death.

Stuart Chandler, the attorney for Noble's mother, Veronica Nelson, put out a statement saying that he urged the police chief to release the video Wednesday. "We are pleased to discover from the media that Chief Dyer is belatedly providing the body camera footage to the general public," Chandler said.

Dyer said he intended to make the video public last Friday, but he held off because of the shooting deaths of police in Dallas the night before.

The video shows Noble first draw officers' attention when he screeched his tires in their search for an armed man.

Noble pulls into a gas station, and officers order him to put both hands out of the window. Noble puts his left hand out the window, concealing his right hand, and officers shout "both your hands!"

Noble gets out of the truck and walks away from officers, at first putting both hands in the air. He turns around and walks toward officers, raising his left hand but putting his right hand behind his back.

"Get on the ground now!" officers continually shout. One yells: "Drop whatever you have in your hand!"

He continues to walk toward officers with his right hand concealed and his left hand in the air.

"You're going to get shot, man," one officer says.

Then the first to shots are fired in rapid succession as Noble shouts out and falls to the ground. On the ground he continues reaching under his shirt, the video shows.

"Quit reaching for what you've got," one officer shouts.

After several seconds the same officer fires one more shot, then seconds later a third officer approaches with a shotgun and fires the fourth and final shot.

Noble's mother and attorney said in a claim filed with the city that the officers used excessive force, and they called the death inexcusable. The claim does not say how much Nelson seeks from the city.

Dyer, who has asked the FBI do its own investigation into the shooting, said he has yet to conclude if officers used excessive force.