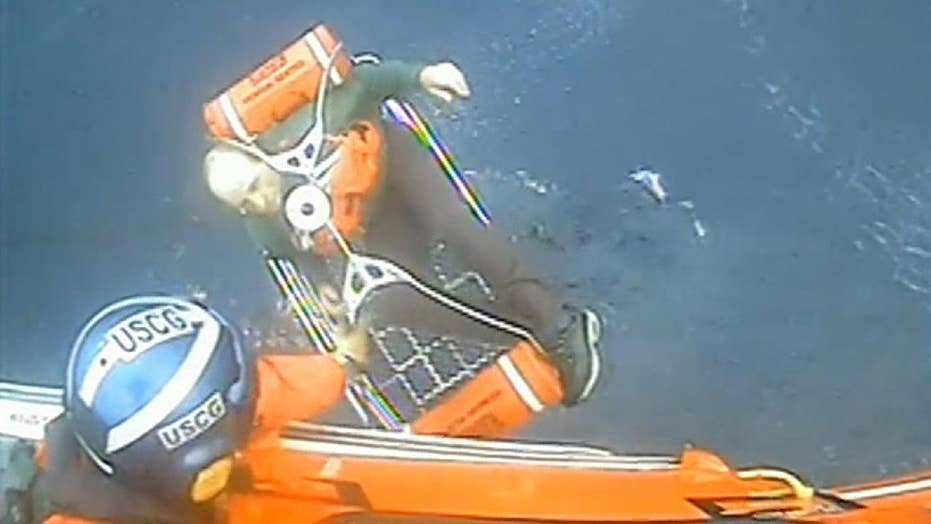 The Coast Guard suspended its search for a missing man early Sunday after rescuing three others from a capsized fishing boat off the northern California coast.

The 54-foot commercial vessel, named Miss Hailee, capsized Saturday about 30 miles northwest of Bodega Bay, the agency said Sunday in a statement. The boat sent a distress call around 5:30 p.m. but never responded to the Coast Guard's multiple callouts.

An MH-65 Dolphin helicopter and boat crews were dispatched to the scene, the Coast Guard said. When the helicopter arrived at around 6:50 p.m., rescuers said they found two men and a woman in the water and hoisted them aboard the aircraft.

The Coast Guard released video showing the rescue of one of the crewmembers from the choppy waters. A rescuer descended into the water from the helicopter and swam to the man. He then dragged the man to a basket that had been lowered so he could be pulled up to the helicopter.

Crews were then alerted that a fourth crew member was missing. The Coast Guard said rescuers were told the missing man was wearing a life jacket.

The rescue team searched through the night for the missing crewmember, covering approximately 368 square miles over 16 hours before suspending the search.

“The decision to suspend a search is extremely difficult and our thoughts are with the missing man and his family at this time,” said Capt. Marie Byrd, the Coast Guard Sector San Francisco commander.

Good Samaritans aboard a tug boat, the Coast Guard Air Station’s C-27 Spartan crew and a Motor Lifeboat crew continued to search for the man, the agency said.

Neither the identity of the missing man nor those who were rescued have been released to the public.