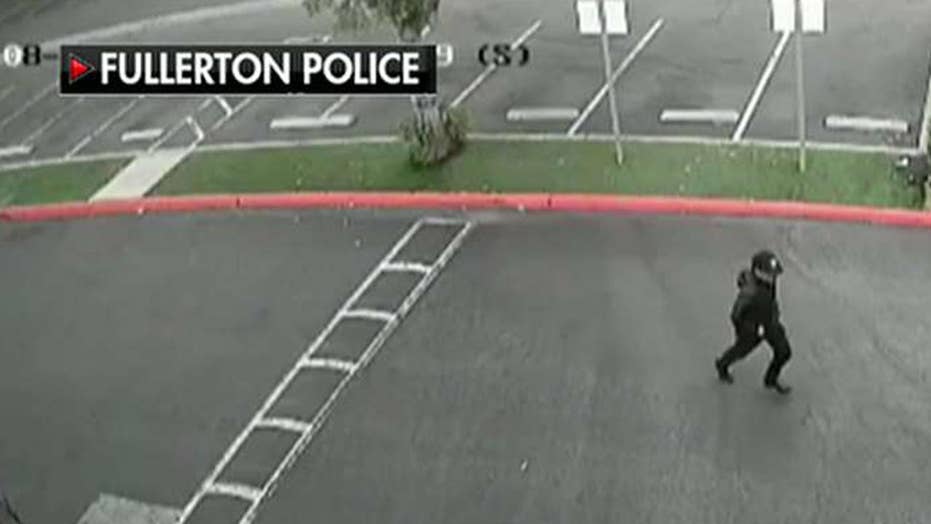 Authorities say the suspect dressed all in black stabbed a retired school administrator and left him to die in his car on the Cal State Fullerton campus; Trace Gallagher reports from Los Angeles.

Police have released surveillance footage in the hope of catching the killer who stabbed a retired college administrator in a parking lot at California State University, Fullerton on Monday.

Investigators say the unidentified suspect is a man in his mid-20s, possibly Asian, with black hair and dressed in all black.

The suspect could be seen on camera running away from the scene where authorities say he stabbed 57-year-old Steven Shek Keung Chan and left him to die in his car. The suspect escaped in a black BMW X6 with tinted windows.

The Cal State Fullerton Police Department said in a statement Tuesday that it received a 911 call at 8:27 a.m. the day before reporting a "male down, bleeding from the head." When first responders arrived, they were unable to save Chan, who had been stabbed multiple times.

The stabbing occurred right as campus police were setting up for an active-shooter drill.

Police uncovered a backpack from underneath Chan's car containing zip ties, wigs and other materials that could potentially be used as a disguise, which seemed to suggest the attack was not random and could have been an attempted abduction. The relationship between the suspected killer and Chan, who was a university consultant at the time of his death, was unknown.

The backpack also contained a crude firebomb; a bottle filled with fuel and matches attached. The device appeared to be deliberately placed under the car and had the potential to cause a small fire if it was manually lit, police said.

Investigators said the suspect also may have been hurt during the attack, with possible lacerations to one or both of his hands. Authorities have not released any word about a possible motive.

Sheriff's deputies tried using dogs to find the suspect, to no avail.

Investigators told Fox News the suspect was also at a burger restaurant near the college before the killing, where he left additional evidence behind. Police would not give specifics.