Broward County Sheriff's Captain Jan Jordan will be replaced with a higher-ranking officer as part of an analysis of the contract the city of Parkland has with the sheriff's office. (File)

The Broward County Sheriff’s Office has identified to Fox News the captain who, according to sources, directed responding deputies and units to “stage” or form a “perimeter” outside Stoneman Douglas High School, instead of rushing immediately into the building, as the mass shooting unfolded there.

Multiple law enforcement and official sources said the commands in the initial moments after Nikolas Cruz allegedly opened fire would go against all training which instructs first responders to “go, go, go” until the shooter is neutralized. As law enforcement arrived, the shooter’s identity and exact location were still unknown.

The massacre on February 14 killed 17 people and wounded 16 others.

Sources told Fox News it was Jordan giving the commands because they were recorded on the dispatch logs coming from Jordan’s radio insignia 17S1, or “Seventeen Sierra One.” 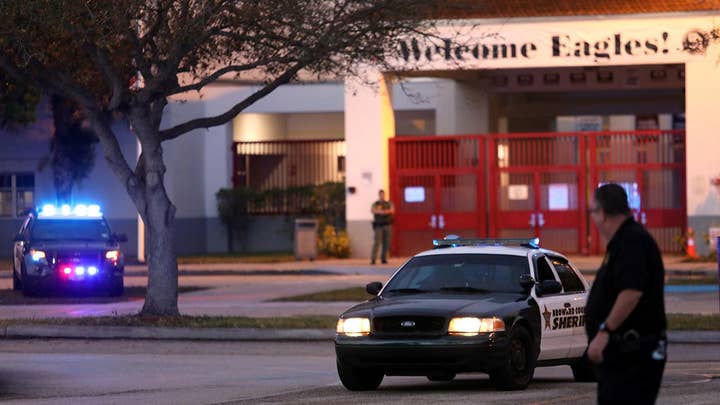 In the email, the BSO spokesperson also shed some light on the allegations against Jordan’s commands writing, “Captain Jordan asked if a perimeter had been established after the shooter left the building.”

Fox News replied to BSO with more follow-up questions, but has not heard back despite multiple requests into its media relations office. BSO’s explanation about the perimeter command might indicate, as Fox News reported, that Jordan knew more information than other law enforcement on scene, and her commands to stage and form a perimeter may have been valid.

BSO also did not respond to Fox News’ initial request for comment about Jordan’s alleged commands to “stage” outside, setting up an area to keep first responders safe before police secure a violent scene. Multiple law enforcement sources said that command also would have been detrimental to victims inside the building because it would have stalled officers.

Photos: Parkland shooter may have tried to shoot out window

New photos of the Parkland, Florida shooting scene appear to show that hurricane-resistant windows may have stopped the gunman from shooting students from a higher vantage point.

“You cannot disregard what Sierra Unit says. They are the commanding unit,” a law enforcement source told Fox News. “When she says she needs a perimeter, every other deputy responding to the scene takes perimeter.”

Several law enforcement sources said BSO’s explanation that Jordan asked for a perimeter did not make sense because anything Jordan was saying on the radio would have been considered a command -- not a question.

“You don’t ask for a perimeter over air. She is the captain. She is the leader. Who would she be asking?” one law enforcement source said.

Dispatch logs obtained by Fox News appeared to show that at 2:32 p.m., roughly 11 minutes after Cruz opened fire, the first command to form a perimeter was issued, “17S1... NEED PERIMETER.”

A copy of Broward County’s active-shooter policy even appeared to indicate that responding deputies and officers may enter the building without permission and should seek to neutralize the shooter until objectives are met — for example, if the shooter is contained. The policy did not appear to indicate a priority for staging or a perimeter.

The Broward County Sheriff's office is performing its own investigation into the timeline of the day of the shooting. The Florida Department of Law Enforcement is also investigating BSO and the Florida Senate subpoenaed the Broward County Public Schools and responding law enforcement agencies for all records and information related to the shooting.