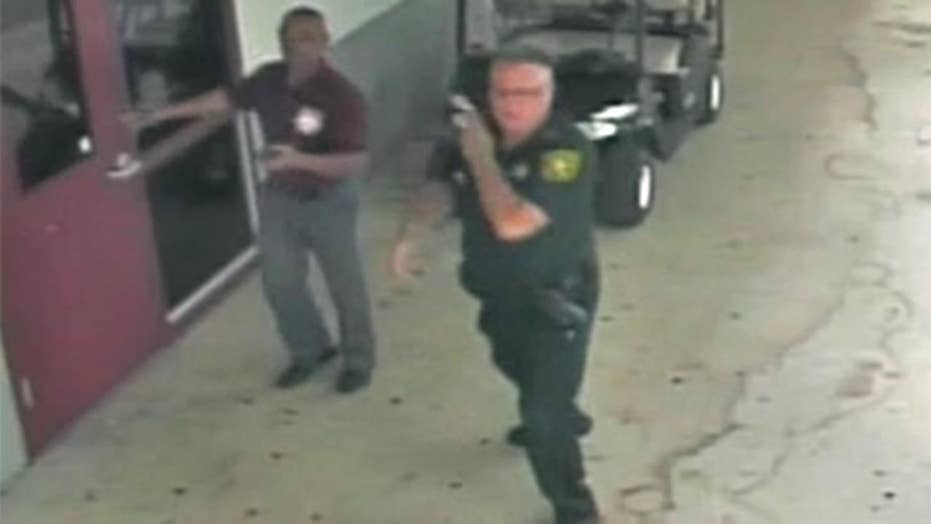 The Broward Sheriff’s Office released the 27-minute video Thursday of the former longtime resource officer responding to initial reports of a shooting at Marjory Stoneman Douglas High School on Feb. 14. Peterson, who was assigned to the school and on site when the shooting began, is seen with a civilian security monitor at the start of the video, but spends most of the video standing outside the school with his gun drawn.

“The video speaks for itself,” the Broward Sheriff’s Office said in a statement. “His actions were enough to warrant an internal affairs investigation, as requested by Sheriff Scott Israel on Feb. 21. After being suspended without pay, Peterson chose to resign and immediately retired rather than face possible termination.”

Broward County Sheriff Scott Israel previously said Peterson, who was armed when gunman Nikolas Cruz opened fire at the Parkland high school, “never went in[to]” the building that was under attack. The sheriff added that Peterson instead took up a position viewing the western entrance of the building — as the video released Thursday shows. Peterson remains in the area for the next 20 minutes. Responding officers arrive at the scene, taking a total of 11 minutes to enter the building from the time shots were first reported.

Cruz, who's not seen in the video released Thursday, killed 17 people and injured 17 others that day with Peterson outside the entire time. Israel said Peterson should have charged in and tried to kill the gunman.

Peterson fired back at the sheriff’s words in late February. In a statement released through his lawyer, the ex-deputy said he initially didn’t enter the building because he believed the shooter was outside. He added that he wished he could have prevented the horrific tragedy, but denied being a “coward.”

Internal radio dispatches released by Broward County Sheriff’s Department, however, revealed the former school resource officer said gunfire was coming from “inside,” according to the Miami Herald.

FLORIDA DEPUTY WHO DIDN'T ENTER SCHOOL DURING MASS SHOOTING IS NOT 'A COWARD,' LAWYER SAYS

Investigators revealed Peterson’s focus was on getting nearby streets and the high school shut down and keeping deputies away from the building.

Former Deputy Scot Peterson was seen on surveillance video the moment when a shooting was reported at Marjory Stoneman Douglas High School. (AP)

The surveillance videos were made public after several media outlets sued for the release. A Broward circuit judge authorized the release on Thursday. Broward County Schools Superintendent Robert Runcie backed Thursday's release of the video, saying it brings "transparency" to the investigation.

"I believe in transparency with the public and I believe they should see it," Runcie had told the Sun Sentinel. "The public has a right to know what happened, and we should be able to learn from that and figure out what we need to change in our institutions to get better as we go forward."

“The attorneys agreed it wouldn’t give any of our secrets away with regard to security” at Douglas High School, School Board Chairwoman Nora Rupert told the Sun Sentinel about the decision not to appeal the video’s release.

It’s unclear if other camera angles surrounding the school were available. 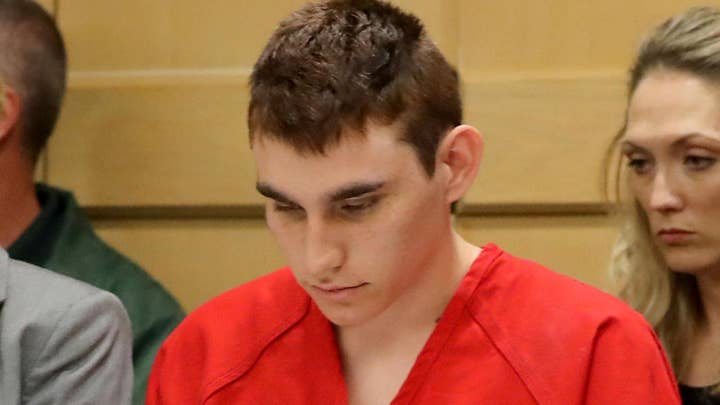 "When it came time to get in there and do something, he didn't have the courage, or something happened," Trump said. "He certainly did a poor job. That's the case where somebody was outside, they are trained, they didn't react properly under pressure or they were a coward."

Cruz appeared in court on Wednesday for his arraignment on 17 counts of premeditated murder and 17 counts of attempted murder. The judge entered a not guilty plea on the gunman’s behalf. Prosecutors on Tuesday filed a notice of intent to seek the death penalty for Cruz.