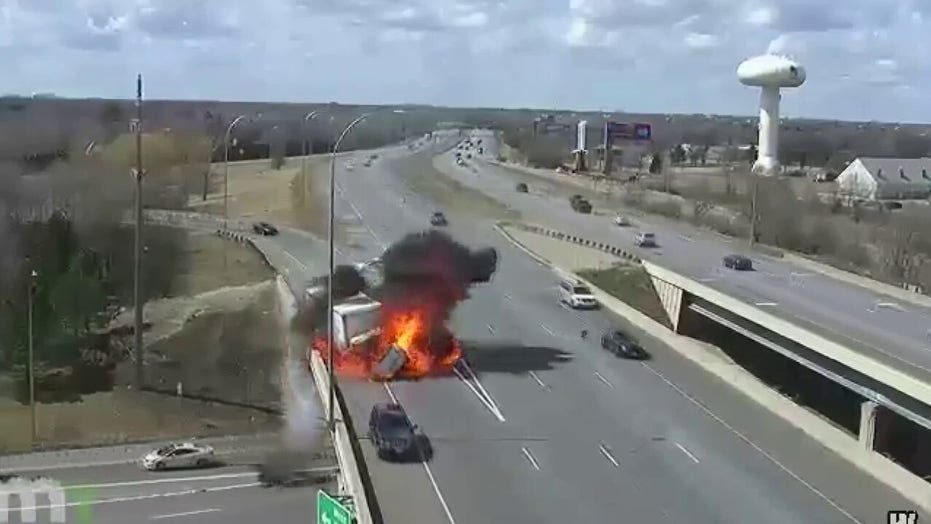 A box truck exploded along a highway in Minnesota on Monday after an out-of-control car collided with the truck, authorities said.

Minnesota authorities released video showing a fiery crash that happened Monday after an out-of-control vehicle merging onto a highway and collided with an oncoming box truck.

DRIVER ON HIGHWAY IN PHILADELPHIA DIES AFTER TIRE CRASHES THROUGH WINDSHIELD

The Minnesota Department of Transportation shared video that shows the passenger car speeding onto the onramp and skidding across the grass directly into the right lane.

Occupants of the box truck were seen exiting the fiery wreckage. (Minnesota Department of Transportation via FOX9 Minneapolis)

The vehicle is seen colliding with a box truck, which then loses control and crashes into the barrier along the right side of the highway. The truck bursts into flames shortly after the crash.

As the video continues, passengers can be seen exiting the burning truck as thick, black smoke engulfs the highway.

Those involved in the crash suffered non-life-threatening injuries, troopers told the station.

The driver of the passenger car showed signs of impairment, according to authorities.

The crash remains under investigation.