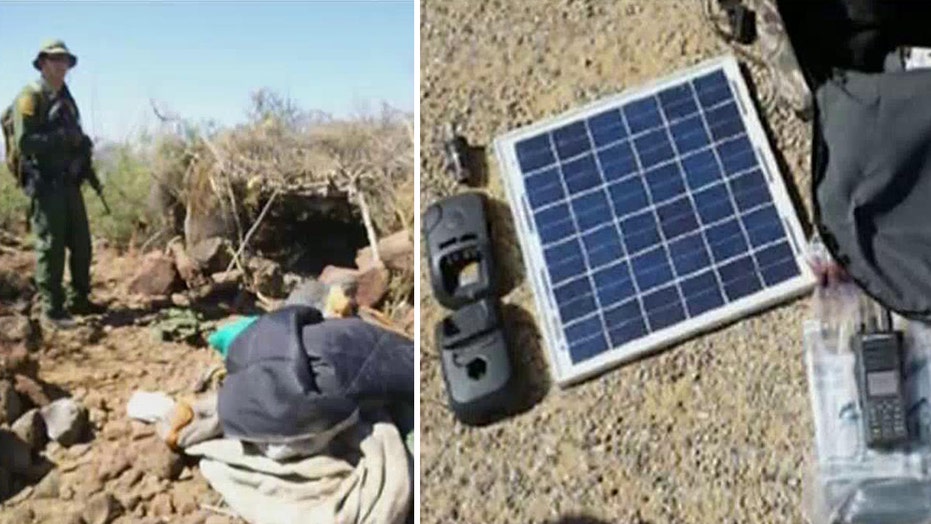 A look at how sophisticated drug traffickers have become

REPORTER'S NOTEBOOK: Our helicopter banked left over the desert not 500 feet below. The Customs and Border Protection Blackhawk came into view. Two agents dropped ropes and rappelled down to the brush-dotted face of the Ajo mountains in southern Arizona.

“I have two in sight,” the Blackhawk pilot radioed to the two agents on the ground. “They crawled under that boulder at your 2 o’clock. You should see them now.”

The agents scampered from rock to rock, cave to cave, looking for the two well-concealed Mexican scouts. Eventually, they located the two laying under a mesquite tree. The two spotters gave up without a fight, laid face down, their wrists tied in plastic cuffs. The Blackhawk dropped two more agents on the sandstone mountain to investigate their lookout post. They found cellphones, radios, solar panels, binoculars, sleeping bags and dozens of empty cans of tuna, Spam and tortillas.

“They’re up there anywhere from five days to 30,” says Robert Lindeman, the deputy in charge of special operations. “They’re the eyes and ears of the criminal organizations that control this area. They guide in the dope and illegal immigrants from the minute they cross the border till they reach a transfer point.”

“The border has never been more secure.”

The scouts serve a special purpose. During the Bush years, the border patrol added 300 miles of pedestrian fence, 350 miles of vehicle barrier, mobile cameras and fixed video towers that can see 6 to 9 miles into Mexico. Those assets pushed smugglers out of the cities and into tougher, less hospitable areas.

In response, the criminal organizations who control the area installed scouts to monitor every move the Border Patrol makes, either holding up or sending through narcotics or immigrant groups depending on their position.

The helicopter operation last week put two scouts out of commission, but officials say it won’t be long before two more take their place.

For all the brash talk about securing the border, seeing it up-close provides a sobering reality. Thousands of trails spread from the Mexican border like tiny veins, snaking left and right, but always north. Deep washes lined with dense green trees provide countless places to hide. An iron curtain spans 300 miles, but in places nothing more than 4 strands of barbed wire separate Mexico from the American Dream.

“The border has never been more secure,” claims Tucson Sector Chief Manny Padilla. “Does that mean our job is done. Absolutely not! We will never be at 100 percent. But compared to where we were, we’ve made incredible gains.”

Just 15 years ago, the border south of Tucson was chaos. On some nights, agents made up to 4,000 arrests. From high points in the Huachuca and Baboquivari Mountains near Nogales, bands of illegal immigrants looked like an invading army, walking in neat rows of 30 to 50, trekking north, then ducking under Palo Verde trees when they’d hear approaching the Border Patrol Expeditions and Suburbans.

In  2000, agents in the Tucson sector apprehended 616,346 illegal immigrants. Through the first 11 months of the 2015 fiscal year, that number is down to 58,389, a 91 percent decline. Padilla feels that success is not reflected in the media or among those in Washington who continue to talk as if the border is still "out of control."

“We still have challenges in the rural areas, but for perspective: We’ve gone from 1,500 agents to more than 4,000. We have cameras, fences and access roads we never had before. Is it perfect? No. But we have much better situational awareness and the ability to put more manpower where it is needed, when it is needed.”

One of those areas is west of Nogales in the Altar Valley, where rancher Jim Chilton lives with a rifle next to his bed and another near the front door.

“I don’t leave home without it,” says the fifth-generation rancher whose 50,000 acres abuts the Mexican border. “The druggers have AK-47s.”

Chilton says he is seeing fewer illegal immigrants, but the drug traffic hasn’t ceased. He finds 60-pound bundles of marijuana and the burlap backpacks used to carry the loads on a regular basis.

“Our fence is four strands of rusted barbed wire strung along some steel posts, easily crawled under or over, and that’s what they do,” said Chilton, 75. They come right through here. This is the highway.”

The takeaway? The border is more secure than in the past. Apprehensions, while not the sole metric of success, are down. But the Border Patrol is only one component of a secure border. And agents will tell you, as long as there is deferred prosecution that shelters illegal immigrants from deportation, and no interior enforcement, worksite raids, employer fines, or local police cooperation, there won’t be border security.