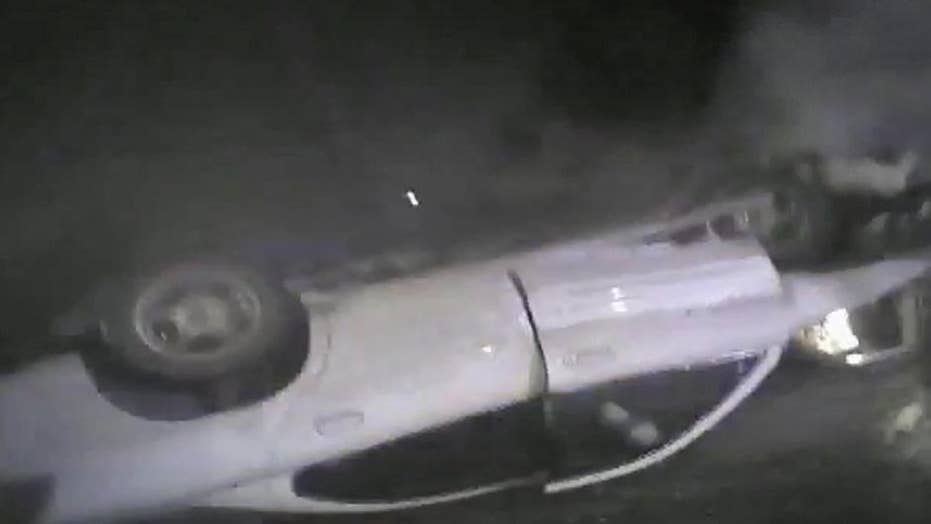 Cops save passengers after car crashes, flips over

Wisconsin police officers sprung into action and pulled two teenage boys from a burning car as flames threatened to engulf the vehicle on Tuesday — a heroic rescue captured on body camera.

Two Milwaukee officers, Nicholas Schlei and Nicholas Reid were in a patrol car around 7:30 p.m. the day after Christmas when they saw a vehicle slam into a utility pole and flip over, FOX6 Milwaukee reported. A fire began and spread.

"Obviously, it's a shock to anyone," Reid said at a news conference on Wednesday. "Immediately, we knew the car was on fire."

"This was one of the worst vehicle accidents I've witnessed," Schlei said.

The officers immediately dashed toward the car and found the driver, a 16-year-old boy, and another teenager in the vehicle. Body camera footage showed the teenagers being pulled from the white vehicle as smoke billowed from it.

Another teenage boy, who was also in the car, was found nearby. The teens were taken to the hospital and treated for their injuries, but told the officers they couldn’t remember any details of the crash.

The driver will be cited for failure to yield and reckless driving, police said.

"To help save someone, there's no better feeling," Reid said. "Every officer at MPD and across the country, they would do the same thing. That's why we joined and that's why we are cops."

The officers will be nominated for a Milwaukee Police Department Merit Award.