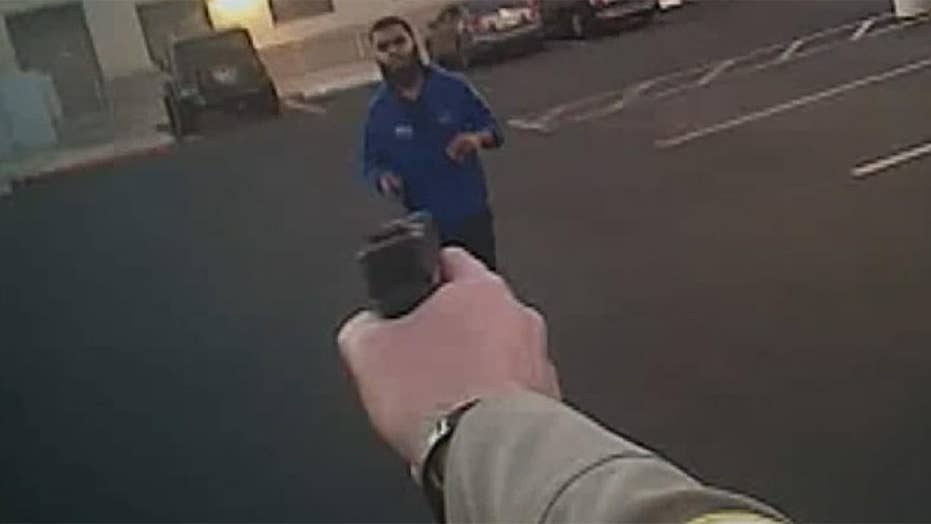 Raw video: Maricopa County Sheriff's Office releases footage of incident where an 18-year-old man was shot after allegedly confronting a deputy with a knife. The man was later charged with making terroristic threats.

A man who pledged allegiance to the ISIS terror group was shot by an Arizona police officer in January after the terrorist-wannabe charged the cop with a knife, newly released bodycam footage shows.

Maricopa County Sheriff’s Sgt. Brandon Wells responded to the scene after Ismail Hamed called dispatchers, committed to the ever-shrinking militant network and asked for a police officer to be sent so he could “deal with them,” police said. Hamed also reportedly told dispatchers he wanted to talk to police about the suffering of Palestinians and issues regarding the Middle East.

“My name is Ismail Hamed," he told 911 operators, according to The Arizona Republic. “I live in Fountain Hills, and I'm owing my allegiance to the Islamic State of Iraq and Syria. I just want a cop to come real quick and I want to deal with them.”

Footage showed Wells talking with Hamed, who initially had his hands in his pockets. Moments later, Hamed appeared to throw rocks at Wells before brandishing a knife. Wells warned Hamed he would shoot him if he kept coming closer with the knife – and he did.

Hamed was charged with terrorism after authorities accused him of attempting to carry out a “lone wolf” attack. He “intentionally or knowingly, did provide advice, assistance, direction or management” to ISIS, the Arizona Republic reported, citing a complaint filed with the Maricopa County Attorney’s Office.