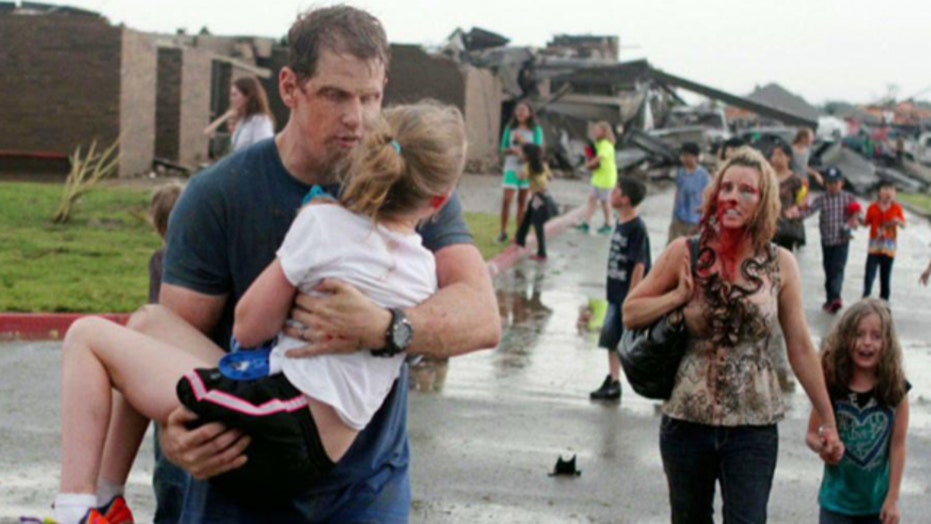 Authorities said Saturday the body of a 4-year-old boy was pulled from the Oklahoma River after Friday's violent tornado outbreak that storm that killed at least ten in Oklahoma and left more than 100 people injured.

Lt. Jay Barnett told the Associated Press the boy was swept into the river on the city's south side Friday night after he and six other family members sought shelter in a drainage ditch. Barnett says a 5-month-old was also pulled from the river and is in critical condition and a woman was also rescued — her condition was unknown Saturday.

As the East Coast braced for the possibility of severe storms Sunday, the all-too-familiar task of cleaning up went on in Oklahoma.

Oklahoma Gov. Mary Fallin toured damage in El Reno, about 30 miles from Oklahoma City, on Sunday. She said in an interview that the death toll could rise as emergency workers continue searching flooded areas for missing residents, but didn't say how many people are believed to be missing.

The EF3 twister touched down a few miles north of Moore, the Oklahoma City suburb pounded by an EF5 tornado on May 20 that killed 24 people.

"The whole key to this is communication between state, federal and local officials," Fallin said. "It's going well -- first responders, law enforcement, emergency managers. We'll rebuild (and) come back even stronger."

The Storm Prediction Center in Norman predicted a slight chance of severe weather in the Northeast on Sunday, mainly from the Washington, D.C., area to northern Maine. Hail and high winds were the chief threat, though a tornado could not be ruled out, forecasters said.

Northeast of St. Louis, the town of Roxana, Ill., also saw damage from an EF3 tornado. National Weather Service meteorologist Jayson Gosselin said it wasn't clear whether the damage in Missouri and Illinois came from the same EF3 twister or separate ones.

Interstates and roadways already packed with rush-hour traffic quickly became parking lots as people tried to escape the oncoming storm. Motorists were trapped in their vehicles — a place emergency officials say is one of the worst to be in a tornado.

"It was chaos. People were going southbound in the northbound lanes. Everybody was running for their lives," said Terri Black, 51, a teacher's assistant in Moore.

After seeing last month's tornado also turn homes into piles of splintered rubble, Black said she decided to try and outrun the tornado when she learned her southwest Oklahoma City home was in harm's way. She quickly regretted it.

When she realized she was a sitting duck in bumper-to-bumper traffic, Black turned around and found herself directly in the path of the most violent part of the storm.

"My car was actually lifted off the road and then set back down," Black said. "The trees were leaning literally to the ground. The rain was coming down horizontally in front of my car. Big blue trash cans were being tossed around like a piece of paper in the wind.

"They had no place to go, and that's always a bad thing. They were essentially targets just waiting for a tornado to touch down," Randolph said. "I'm not sure why people do that sort of stuff, but it is very dangerous. It not only puts them in harm's way, but it adds to the congestion. It really is a bad idea for folks to do."

The Oklahoma County Sheriff's Office said the body of a man who went missing from his vehicle early Saturday near Harrah, east of Oklahoma City, was found later in a creek by deputies. Roadways around the area were crumbling because of water, especially near an intersection in northeastern Oklahoma City and in Canadian County south of I-40, between Mustang and Yukon.

When the storm passed between El Reno and Yukon, it barreled down I-40 for more than two miles, ripping billboards down to twisted metal frames. Debris was tangled in the median's crossover barriers, including huge pieces of sheet metal, tree limbs and a giant oil drum. The warped remains of a horse trailer lay atop a barbed-wire fence less than 50 yards from the highway.

The Oklahoma Corporation Commission reported more than 91,800 homes and businesses across the state remained without power Saturday.