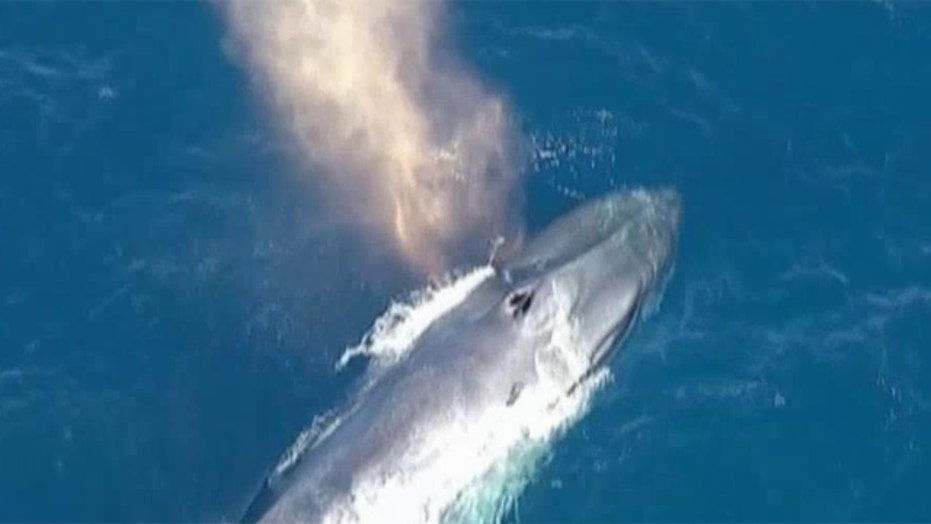 Rescue effort underway to save blue whale tangled in net

The whale, believed to be about 75 feet long, was spotted off the California coast

RANCHO PALOS VERDES, Calif. – Boats, airplanes and helicopters searched up and down the Southern California coast Saturday for a blue whale that got tangled up in hundreds of feet of line, and rescuers said unless they free it, the massive mammal could eventually die.

A Los Angeles County sheriff's helicopter was among the craft searching for the whale from Santa Barbara south to Orange County.

"My gut feeling is it went south" but its actual path remained a mystery, said Peter Wallerstein, president of the nonprofit group Marine Animal Rescue.

"We're having to look all over for it," he said.

The whale was estimated to be 80 feet long, twice the size of the average city bus. It was spotted Friday in the channel between Santa Catalina Island and the mainland.

The whale was towing a 200-foot line with an attached buoy that may be from a crab pot, Wallerstein said.

The whale was spouting, swimming on the surface and occasionally diving. It appeared healthy, if a little thin but the huge animal cannot drag the line forever, Wallerstein said.

"Eventually it's going to get tired out and die," he said.

The sea was too rough to try approaching the whale or cutting the line Friday evening so rescuers just attached a larger buoy to make it easier to spot. However, it slipped away overnight.

Blue whales are the largest animal species that ever lived. They can reached 100 feet in length and weigh 200 tons.

Wallerstein said that while rescuers have untangled smaller gray whales caught in fishing nets, it was the first time anyone in California has seen an entangled blue whale and rescuers want to proceed cautiously.

"We haven't had experience with such a large animal," he said. "One flip of the tail could kill you and knock your boat out."

With many people out boating for the Labor Day weekend, rescuers are hoping to get word of the whale's whereabouts.

Anyone spotting the whale should contact authorities but don't get near it, Wallerstein said.