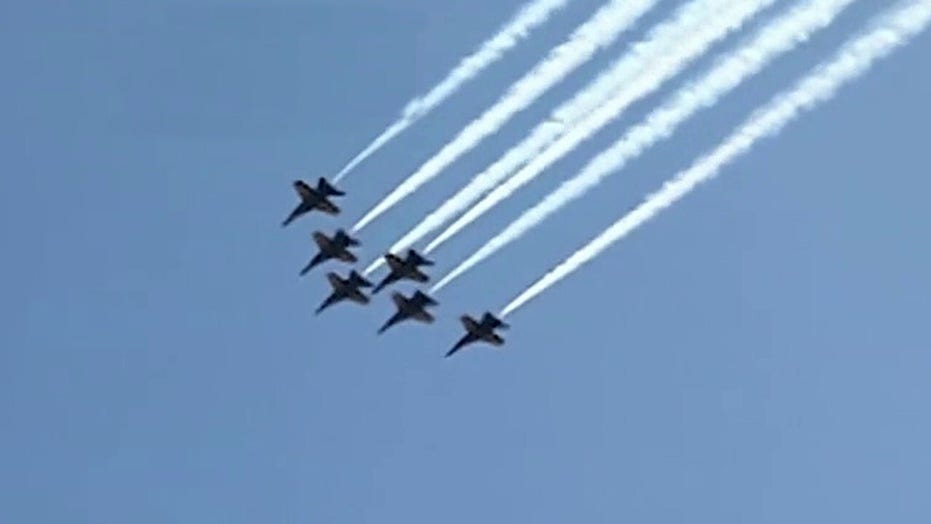 Large crowds gathered on the National Mall in Washington, D.C. on Saturday to watch a Blue Angels and Thunderbirds flyover honoring health care workers on the frontlines of the coronavirus pandemic.

Though some photos showed families appearing to separate in clusters on the lawn -- adhering to U.S. Centers for Disease Control and Prevention guidelines to keep at least six feet apart -- some observers questioned whether social distancing became impossible as crowds grew.

“Not a lot of social distancing happening on the National Mall right now ahead of the Blue Angels flyover,” Justin McCarthy tweeted, sharing a selfie with a bandana over his nose and mouth.

A second photo showed distant crowds near the Washington Monument.

“Not sure this is exactly the best way to honor COVID workers but...” McCarthy wrote.

People view the U.S. Navy Blue Angels and U.S. Air Force Thunderbirds as they fly over the National Mall in Washington, Saturday, May 2, 2020. The flyover was in salute to first responders in the fight against the coronavirus pandemic. (AP Photo/Patrick Semansky)

“On the national mall covering the Blue angels and Thunderbird flyover and there are SOOO many people here. Not wearing masks. Not social distancing,” NBC News correspondent Leigh Ann Caldwell tweeted.

A spokesperson for the National Parks Service told Fox 5 DC that crowds were “generally well-spaced” during the flyover.

Another Instagram user, bluesometwosome, shared a photo showing an area of the National Mall where people, some of whom were wearing masks, left considerable space on the green lawn as the planes passed overhead. Firetrucks were also seen parked at the scene.

The Navy's Blue Angels and the Air Force's Thunderbirds took off from Fort McHenry in Baltimore around 11:30 a.m. Saturday. The squadron of 12 high-performance jets flew in formation above Maryland, Virginia and Washington D.C., passing over key hospitals and neighborhoods, before making its way to Atlanta.

An image of the flight plan released by Maryland Gov. Larry Hogan’s office included this message: “Residents should observe the flyover from the safety of their home-quarantine and should refrain from traveling to see the flyover. Social distancing should be practiced at all times. Stay home and stay safe!’

People view the U.S. Navy Blue Angels and U.S. Air Force Thunderbirds from the Washington Monument as they fly over the National Mall in Washington, Saturday, May 2, 2020. The flyover was in salute to first responders in the fight against the coronavirus pandemic. (AP Photo/Patrick Semansky)

Coordinated by the Department of Defense as a “goodwill gesture,” the flyovers Saturday followed similar demonstrations by the Blue Angels over New York City, Philadelphia and northern New Jersey last Tuesday.

A Fox 5 broadcast outside Sibley Memorial Hospital in D.C. on Saturday showed people begin to park their cars, with some children sitting on top of vehicles, to view the flyover while also maintaining social distancing.

In Atlanta, crowds gathered Saturday afternoon in the streets and on bridges to watch the tribute.

Police were at the Jackson Street Bridge to direct traffic and conduct crowd control before the flyover began, the Atlanta Journal-Constitution reported.

Onlookers, including former Georgia Attorney General Sam Olens, shared videos of the jets in the sky as crowds below applauded.

“The sound of freedom -- in honor of Responders,” he wrote.