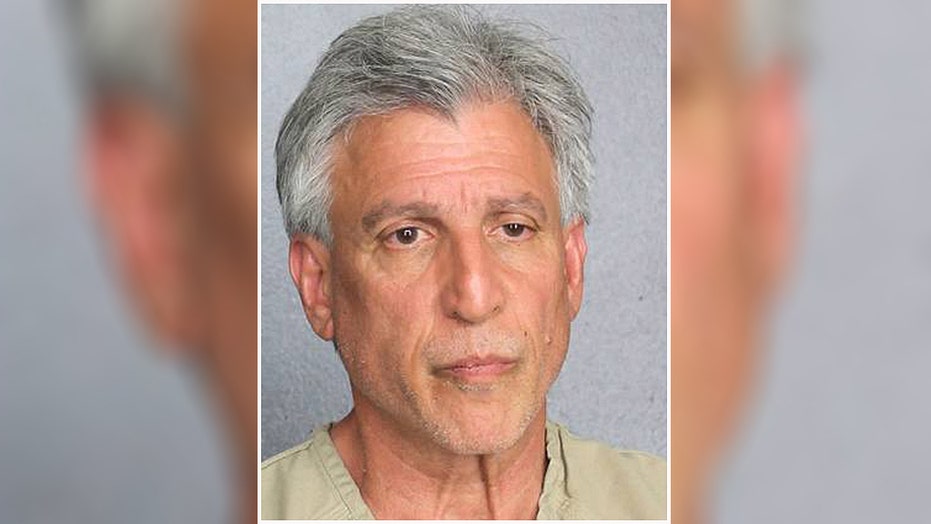 Two bloody bodies were found on the beach in Fort Lauderdale Tuesday morning.

Police are now investigating whether the double-homicide is connected to a separate incident that led officers on a nearly 20-mile, high-speed chase down Interstate 95 on Monday.

The bodies of two men in their 40s were found with stab wounds around 6:15 a.m. Tuesday on a beach behind L’Hermitage, a condominium complex with waterfront properties.

Daniel Dovi, 63, of Sellersville, Penn., has been charged in connection to an aggravated assault and high-speed chase in Broward County on Monday. Police are investigating whether he is tied to a double-homicide after two bodies were found on a Fort Lauderdale beach Tuesday morning. (Broward County Sheriff's Department)

The victims have not been identified by authorities, but Fort Lauderdale Police Detective Ali Adamson confirmed the deaths were not the result of a murder-suicide, the South Florida Sun-Sentinel reported.

In a separate incident Monday, residents reported seeing a man they did not recognize in a white Jeep Wrangler parked in a nearby vacant lot on Center Avenue, where he appeared to have set up camp.

One of the owners of the lot, Michael Jones, said he drove his Porsche onto his property and tried to approach the man, WFOR-TV reported.

“He got up, he came over and he shoved me to the ground, started screaming at me, told me he was going to kill me,” Jones said.

Jones said he retreated to his car before the man jumped behind the wheel of the Jeep. The man slammed into Jones’ vehicle and clipped a golf cart parked on the property before peeling off.

“I saw crazy in his eyes… I got back in my car,” Jones recalled. “I got back in the car at that point to try and put it in gear to get the hell out of here, there was no time.  He floored it, put it in reverse, floored it and slammed right into my Porsche.”

Jones said he then called the police and while officers, who had arrived to the scene, were taking a report, the man returned to the lot a second time. That’s when the police went after him.

Dramatic video broadcast live on WSVN showed officers chasing the white Jeep for more than 20 miles down I-95 before appearing to separate the vehicle from other traffic in the Boca Raton area in Broward County near the Palm Beach County line.

A Florida State Highway Patrol trooper clipped the rear driver side door, and the Jeep spun 180 degrees before flipping over and rolling. Cops drew their guns, removed the top of the Jeep and pulled out the driver, forcing him on his stomach before handcuffing him.

The charges against Dovi, a resident of Sellersville, Penn., came in connection with the incident in the lot and the high-speed chase that followed. He has not been charged in connection with the homicides – but authorities are investigating whether Dovi may be linked to the killings given the lot is located only about a half-mile from where the bodies were found.

Adamson said Tuesday morning there was no apparent threat to the public.

“The incidents occurred within close proximity and timeframe to one another and as a result detectives are looking into the possibility that the two incidents may be related,” Adamson said in a statement, according to WFOR.