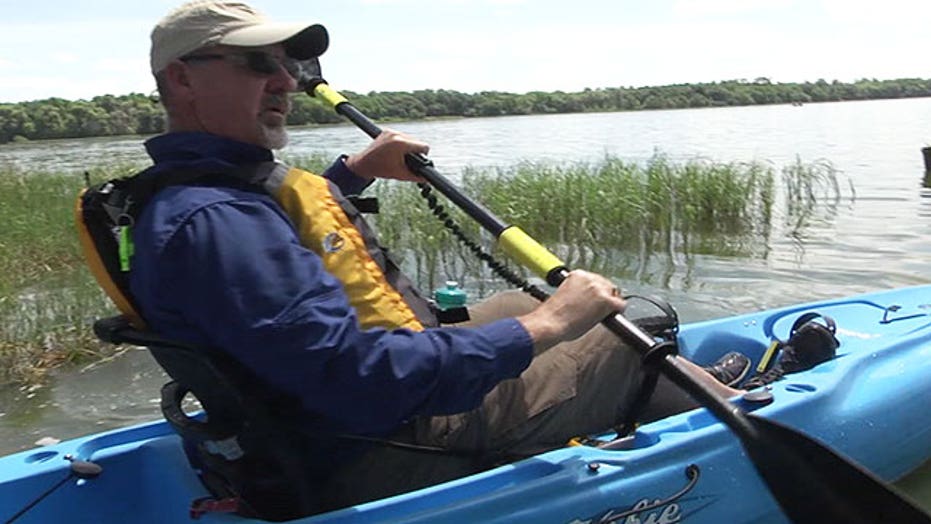 Blind Army Veteran is full time adventurer thanks to the VA

GAINESVILLE, FLA. – Charles Miller is a 58-year-old legally blind Army veteran who refuses to let his lack of eyesight stop him from anything. “If anyone said, ‘you can’t do that’…I would tell them to give me a chance to try it and I’ll do it,” Miller said.

The vet, who lives in Gainesville, Fla., has hiked for weeks along the Appalachian Trail, ran a marathon in California, rode a tandem bicycle across the State of Iowa twice, and is currently training for a four-day, 500-mile bike ride from Charlotte, N.C. to Washington D.C. in May.

“For me it’s all about pushing myself to do things now that I didn’t think I could do a few years ago,” Miller said.

He was an Army Infantry Captain when his eyesight began to deteriorate from a rare genetic disease called Retinitis Pigmentosa. Miller hid his vision loss from his friends and family as he realized he was loosing his independence.

“When I was still in the military it was difficult for them to adjust to it. At the time, they didn't really look at my disability as a factor.They looked at me as a solider," Miller remembered. "I don't fault them at all for that because we had a mission to do and I wanted to do my job."

He served on Army bases in four different states over his 27-year career. As his vision continued to fade, he began to realize he was not capable of performing the duty he had signed up for.

Miller was honorably discharged from the Army in 2009. After that, his Veterans Affairs coordinator in Gainesville encouraged him to attend a blind rehab facility at Birmingham VA Medical Center. He said that’s where he realized he had two choices: sit around and wait for his life to be over—or learn how to really live and move forward. “I learned that even though you have a challenge in your life, doesn’t mean you have to stop being human,” he said.

One of the ways he did this was through adaptive sports.

Miller was not particularly active outside his job with the infantry before he became legally blind but the Department of Veterans Affairs built up his confidence and fostered an adventurous drive.

“You can work beyond what you thought were your capabilities, if you have the drive and determination to do so,”Miller said.

“To be honest, I’m intimidated by the idea of zip lining…but I hope I’ll have the opportunity to try it one day.”

The VA awarded $8 million in fiscal year 2014 to community-based programs nationwide that teach sports to those with varying disabilities.

The 56 programs that received funding are located in Washington, D.C. and 28 states.

Bruce Davis, VA Visual Impairment Services Case Manager, watches the Adaptive Sports Program empower disabled veterans, boost self-worth and enrich other aspects of their lives. “Someone who gets involved with sports may be more involved in volunteer activities, more likely to help their kids in their activities, more likely to go back to school or even go back to work,” Davis said.

“People at the VA have never treated me like I have a disability, even though I do. I’m exactly like you are…I’m not any better, I’m not any worse,” Miller added. “I just have one thing that’s different. Everyone has something and mine just happens to be that I can’t see.”

Miller explained his thrill with the adventures comes from the few euphoric moments when his adrenaline is engaged and his senses are all perfectly in tune with his surroundings. “It’s like I can see the world clearly, for the briefest of a second.”

He doesn’t see an end to his adventures anytime soon; decades from now he thinks he’ll still be doing the same things but hopes to add skiing and snow boarding to his list. His 16-year-old son sometimes joins Miller on the adventures with his friends.

And now he’s looking forward to conquering his next sport: “Maybe it will be surfing.”

Taylor Nones is a student in the Fox News Campus Associate Program.
Get more information on the program here.