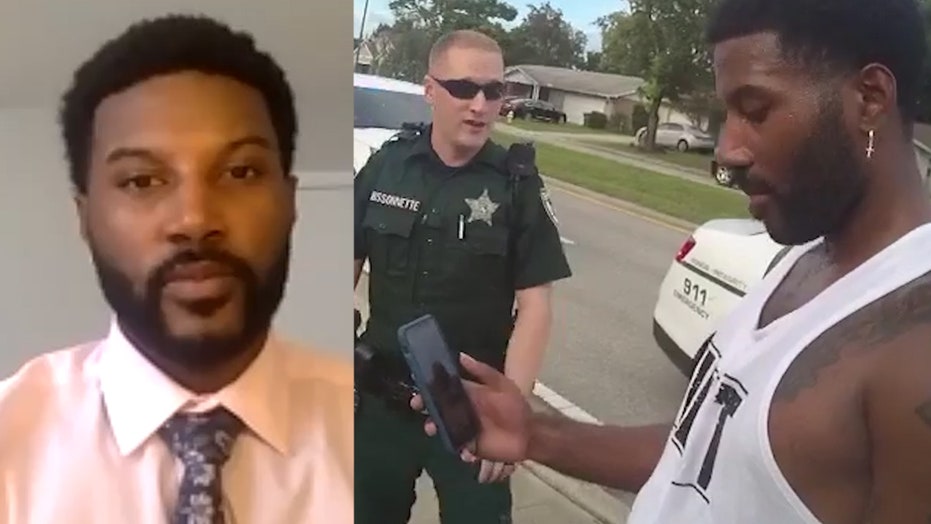 Joseph Griffin, a Black man and military veteran, was out jogging in Deltona, Fla. when deputies stopped and detained him for matching the description of the suspect they were looking for. The now registered nurse says his former experience as law enforcement in the military taught him to remain calm and compliant during the 15 minute ordeal. The local sheriff praised how both sides handled the situation and has hired Griffin to talk with his department for implicit bias training next month.

A Black jogger who was detained in Florida last month for matching the description of a burglary suspect has been offered a job in the county sheriff’s office for the way in which he handled the encounter with the deputies who detained him.

Joseph Griffin was detained by deputies while out on a jog last month.  (Volusia Sheriff's Office)

Griffin had taken out his phone and had begun live-streaming the encounter on his Facebook page.

“If something happens to me, y’all better raise hell,” Griffin says on the video.

“It’s just a lot goin’ on today,” Griffin says, alluding to nationwide protests against police brutality in the wake of the death of George Floyd, who was Black, on May 25 while in police custody in Minneapolis and, more recently, the shooting by Wisconsin police of Jacob Blake, who is Black, and whose family says he is now paralyzed.

Griffin kept his calm with the deputies for another 13 minutes before they allowed him to leave. He said his experience as a law enforcement officer in the military allowed him to remain calm and compliant.

But Griffin also said the experience was unnerving. He told Orlando’s Fox 35 that witness descriptions are never totally accurate.

“It is very scary when your future is in the hands of that nonperfect identification and description,” he said. “It was unfortunate that an innocent person was stopped, but they stopped the person based on the description that was provided.”

Volusia County Sheriff Mike Chitwood praised how both sides handled the situation. He also acknowledged the importance of understanding either side’s point of view.

Chitwood has invited Griffin to talk with the sheriff’s department for implicit bias training, where he will tell the story from his perspective.

“I think we can all learn from his point of view, just like he has listened to ours,” Chitwood said in a Facebook post. “Mr. Griffin is a military veteran and a medical professional, and I told him we'd train and hire him as a deputy in a second if he ever wants a new job.”

Chitwood said that deputies managed to arrest the actual suspect before he broke into someone else’s property.