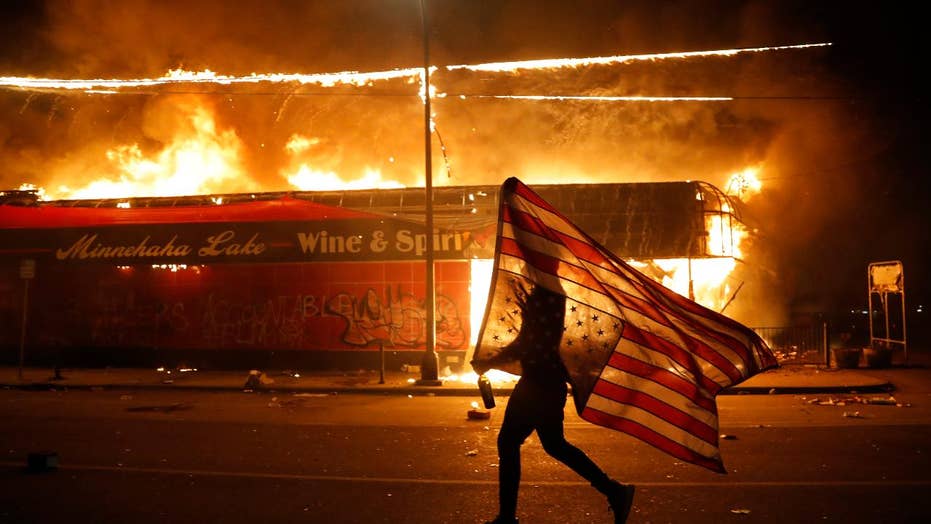 Black activists in Minnesota were seen arming themselves on Thursday to protect local businesses amid the looting and rioting following the death of George Floyd last week.

Floyd, 46, died Monday night after a police officer pressed his knee against his neck for more than eight minutes. Footage released of the incident showed Floyd shouting, “I cannot breathe” and, “Don’t kill me.”

In a video that went viral on Twitter, the civilians were captured holding semi-automatic rifles outside of a local business in St. Paul, near Minneapolis -- where Floyd died in police custody.

A man breaks a window at a tire store Thursday, May 28, 2020, in St. Paul, Minn. Minnesota Gov. Tim Walz called in the National Guard on Thursday as looting broke out in St. Paul and a wounded Minneapolis braced for more violence after rioting over the death of George Floyd, a handcuffed black man in police custody, reduced parts of one neighborhood to a smoking shambles. (AP Photo/John Minchillo)

"Run up here and see what happens. ... You see that? Black owned," a person recording the video was heard saying as he highlighted the locally owned businesses Thursday. "Run up in this b---- or my momma we're gonna do that to ya a--*"

The video was retweeted by an account called The Official Grand Master Jay, a man who reportedly leads a group called the Not F---ing Around Coalition (NFAC), which is described as an all-black militia comprised of mostly ex-military shooters, according to Reason Magazine. It reportedly has upwards of 15,000 members.

He has been using his social media accounts to showcase the group's armed protests, the magazine reported.

Armed white civilians have also been captured on social media protecting businesses with high-powered weapons following the looting in the Twin Cities.

People self-described as "Free America" were seen armed with assault rifles stood outside a tobacco store on Wednesday, as protests -- originally peaceful -- turned chaotic. Fires, looting, and destruction were originally reported in area. Riots have spread nationwide in recent days.

"So, bottom line, justice for Floyd and I hope they stop looting at some point," the group said, according to Max Nesterak of the Minnesota Reformer.

In California, a liquor store owner said he stood in front of his business in Santa Monica armed with an AR-15 to discourage looters.

“It was a good thing I had my customers and friends by my side, because it was pretty scary,” the man identified only as Joe told CBSLA.

Meanwhile, the brother of George Floyd told ABC News he wants justice handed to the officers responsible for his brother's death, but as violent demonstrations are currently wreaking havoc in many cities across the country, he feels they are not what his sibling would have wanted.

"Don’t tear up your town, all of this is not necessary because if his own family and blood is not doing it, then why are you?" Terrence Floyd told the news organization.

"If his own family and blood are trying to deal with it and be positive about it, and go another route to seek justice, then why are you out here tearing up your community?" he said. "Because when you’re finished and turn around and want to go buy something, you done tore it up. So now you messed up your own living arrangements. So just relax. Justice will be served."