A California woman was arrested last week on multiple charges after admitting to starting a wildland fire near South Lake Tahoe, authorities said.

In a Facebook post, the El Dorado County Sheriff's Office wrote that fire personnel had directed deputies to 43-year-old Viola Liu on Wednesday.

"On Wednesday morning deputies responded to the area of the Aspen Creek Tract near Echo Summit for a report of a wildland fire. Deputies arrived and contacted fire personnel who directed them to a likely arson suspect on scene," officials wrote.

"Deputies contacted the adult female potential suspect, who was dressed in only a bikini top and bottom and was covered in scratches and soot," they said. "The female later admitted to starting the fire, which was corroborated by other evidence in the investigation."

Liu, from Fremont, was later booked in the El Dorado County Jail on suspicion of arson, possession of a controlled substance, possession of drug paraphernalia and resisting/obstructing a peace officer.

"This is a great example of first responders working together and sharing information to help protect our community," the office said.

A photo from the sheriff's office showed charred ground and trees, though it was not immediately clear if the fire remained active and how large it was.

A request for comment was not immediately returned by the El Dorado County Sheriff's Office. 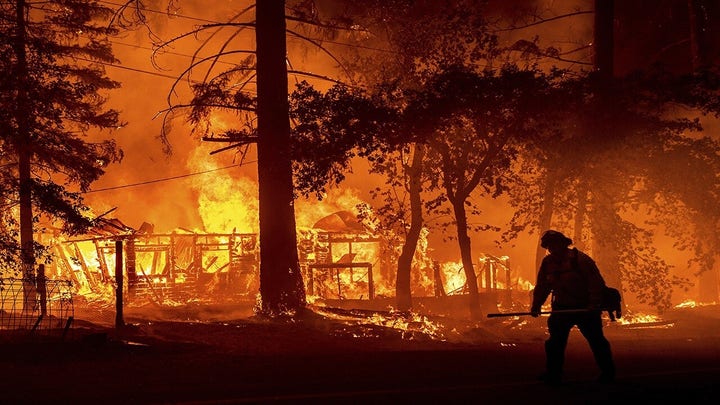 According to the National Interagency Fire Center, there are currently 11 active fires burning in California.

The Dixie Fire – the state's single largest wildfire – has scorched 578,897 acres since it began in July.

Thus far, more than 2.2 million acres have burned in 104 large fires and complexes across 12 states.