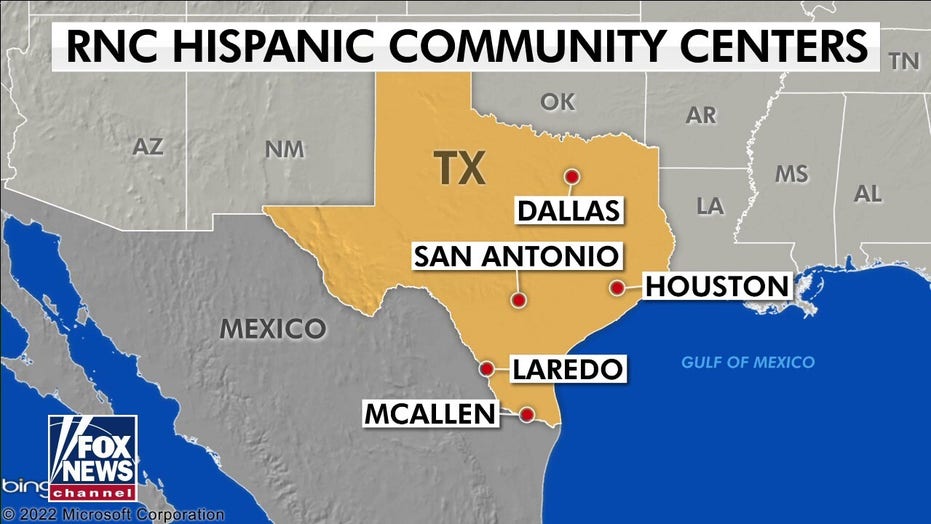 GOP aiming to win over Hispanic voters in Texas

Alicia Acuna reports from McAllen, Texas on the RNC working to win over Hispanic voters in the upcoming 2022 midterm elections

"Biden's 35% job approval among registered voters ties the low that he received in a Quinnipiac University poll on Jan. 12, 2022, when his job approval rating was a negative 35-54%," Quinnipiaq wrote in their breakdown of the data.

"Among registered voters, 35% approve of Biden's job performance, while 55% disapprove with 10% not offering an opinion," the poll analysis added.

President Biden pauses during a meeting with the leadership of the Congressional Hispanic Caucus at the White House on April 20, 2021. (Doug Mills-Pool/Getty Images)

According to the data, only 12% of Hispanic respondents "approve strongly" of Biden's performance as president, coupled with an equal 12% who "approve somewhat."

A staggering 41% of Hispanic respondents "disapprove strongly" of Biden's tenure as president, as well as 13% who "disapprove somewhat."

Hispanic voters are now evenly split in their support between Democrats and Republicans, a sharp turn from their previously overwhelming support for the former.

"Nothing has happened that was promised," government and businesses consultant Bertica Cabrera Morris told Fox News Digital. "I think the country is more divided than normal. It was divided during Obama, then during Trump, and now again – it's not going in the right direction. It's not the right leader."

Morris pushed back on the idea that the Hispanic community has previously been in the Democratic camp.

"To give you an example, I'm Cuban American but a lot of my family is Puerto Rican," Morris said. "The numbers showed that they would come to the United States from Puerto Rico and they would immediately be told they are Democrats. But as time went on – the Puerto Rican community is very conservative. You see Puerto Ricans going to war – they are big time in the service. And they don't like what they're seeing."

"People think of Puerto Ricans as Democrats, but actually when they get to the mainland, they think differently," she added. "They don't sign in as Democrats, they sign in as Republicans. Or in a very short period of time, they realize what they are."

Earlier this year, a number of political leaders within the Hispanic community sat down for interviews with Fox News and blasted the left's portrayal of the Latino electorate, including Sen. Marco Rubio, R-Fla., Rep. Maria Salazar, R-Fla., and American Conservative Union senior fellow Mercedes Schlapp. All predicted big gains in support for Republicans from Hispanic voters.

With just over a month to go until President Biden’s administration rescinds a Trump-era pandemic restriction known as Title 42 that severely restricted the ability of migrants to cross the U.S.-Mexico border to seek asylum, some high-profile Democrats running in the 2022 elections are voicing serious concerns.

President Biden holds a meeting on infrastructure with labor and business leaders at the White House on July 22, 2021. (Reuters/Jonathan Ernst )

Title 42 was an order issued by Donald Trump’s administration amid the coronavirus outbreak. It was used by both the Trump and Biden administrations to expel a majority of migrants at the border.

While it is a public health order, not an immigration policy, it became one of the central border policies in place as the U.S. faces a continuing crisis of numbers at the border. And the Biden administration’s move came after more than a year of pressure from fellow Democrats amid frustration with the inability to end a policy they view as illegal and cruel to those fleeing persecution.