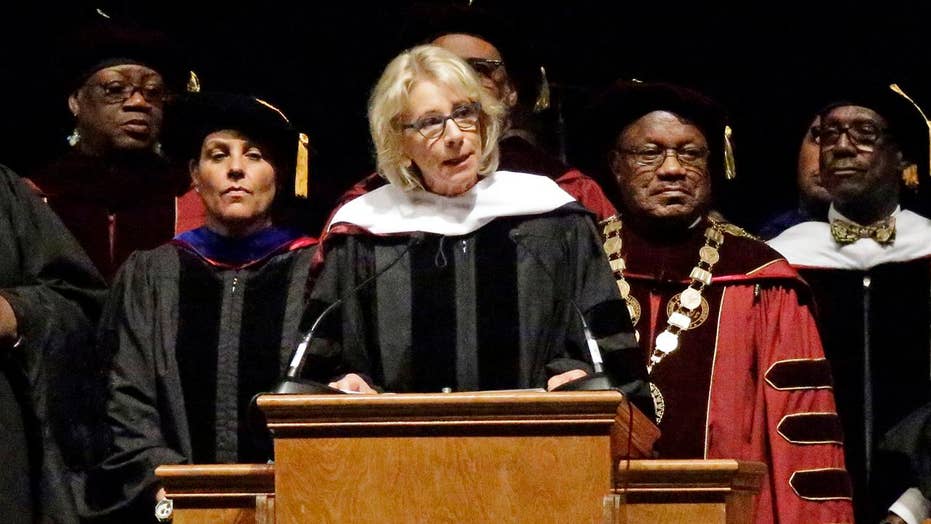 For 20 minutes, Secretary of Education Betsy DeVos, President Trump’s most opposed cabinet secretary nominee during confirmation hearings, endured jeers from the graduates and interruptions from the university president to calm down the crowd.

At one point, President Edison Jackson even threatened to “send your diplomas in the mail” if the noise didn’t stop.

For most of her speech, and during her receipt of an honorary degree in Human Letters, the students continued the past 10 days of contention that, of all people, she won the invite for the keynote address.

In her speech, DeVos directly addressed the controversy.

"As I said, I'm grateful to be with you today,” said DeVos. "While we will undoubtedly disagree, let us do so respectfully, and let us hear each other out."

When the historically black university announced May 1 that DeVos would be the speaker, the local NAACP, National Federation of Teachers and Florida Education Association immediately voiced outrage, arguing she’s an enemy of public education, a champion of school choice, favors using tax dollars to pay for kids to attend religious, private schools and is ignorant about the origins of historically black colleges and universities.

That opinion comes from a statement DeVos released in February, referring to historically black colleges and universities:

“HBCUs are real pioneers when it comes to school choice. They are living proof that when more options are provided to students, they are afforded greater access and greater quality.”

Many historically black school leaders expressed shock and dismay that DeVos didn’t also mention how segregation, racism and Jim Crow forced the creation of black colleges in the first place, i.e., there was no “choice.”

Students, alumni and the NAACP organized an online petition drive calling on DeVos to be disinvited and for Jackson and Board Chairman Joe Petcock to resign.

On Wednesday, President Jackson defended the DeVos invitation, saying “It’s important to understand that people will disagree, but that does not mean that you roll over and play dead because you disagree.  This is a good day for us. Can you imagine how many institutions would love to have the secretary of education, the highest educational officer in the land, to be their commencement speaker and hopefully open new doors for this institution?”

Jackson added that the Department of Education controls 87 percent of Title IV funding and money is needed at historically black colleges and universities to help students graduate with degrees and impact their communities.

Caylin Mason, one of Bethune-Cookman’s 300-plus 2017 graduates, said she was excited about graduation: “Four years..it all paid off.” But when asked about the controversy over DeVos, Mason had two words.