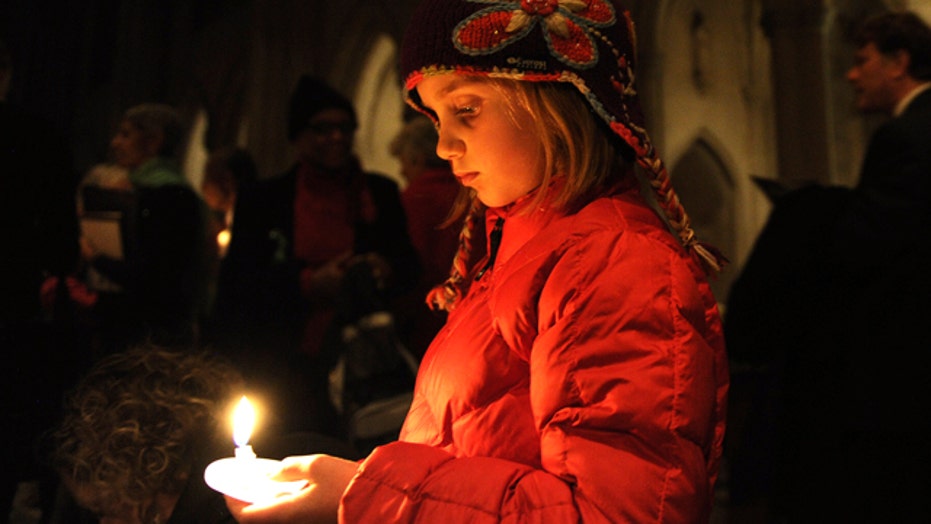 Newtown officials called for privacy and asked town residents to honor the 26 victims of the Sandy Hook Elementary School shooting through acts of service and kindness as the town quietly marks one year since the massacre.

Connecticut Gov. Dannel Malloy and Lt. Gov. Nancy Wyman directed U.S. and state flags to fly at half-staff on Saturday to honor the 20 children and six adults who were gunned down inside the school on Dec. 14, 2012.

Houses of worship around the state rang their bells 26 times as names of each victims were read. St. Rose of Lima, a Roman Catholic church in Newtown that hosted funerals of eight children killed in the massacre, planned a service to include the dedication of a memorial arch and the ringing of peace bells that were also rung at Virginia Tech after the mass shooting in 2007 and in New York after the Sept. 11, 2001, terrorist attacks.

Newtown residents prepared for private memorial services and a quiet day of reflection.

"You kind of hope the town can put it behind without actually forgetting about the victims," Andrew Snow, who grew up in Newtown but lives in Southbury said. "But it's not easy to do. I think about it every day," Snow said.

The town had no formal events planned and officials discouraged the news media from coming to Newtown.

"We are trying to respect the world's interest in us, but we also have a real need in our community to gain a foothold," First Selectman Pat Llorda said.

President Obama was joined by first lady Michelle Obama in a moment of silence and candle lighting at the White House. Obama also called on Americans to help prevent future violence in his weekly radio address as he said the massacre would be remembered as a tragedy that inspired the nation to make communities safer.

At a joint appearance during the week, some of the victims' families urged people to find ways to give back to their own communities as a way to honor the victims.

"In this way, we hope that some small measure of good may be returned to the world," JoAnn Bacon, whose 6-year-old daughter, Charlotte, was killed at Sandy Hook.

The gunman, Adam Lanza, killed his mother inside their Newtown home on Dec. 14, 2012, before driving to the school, where he carried out his rampage. He killed himself as police arrived.

At St. Rose of Lima, the Roman Catholic church that hosted the funerals of eight children, a service will include the dedication of a memorial arch and the ringing of peace bells that also were rung at Virginia Tech after the mass shooting there in 2007 and in New York after the Sept. 11, 2001, terrorist attacks.