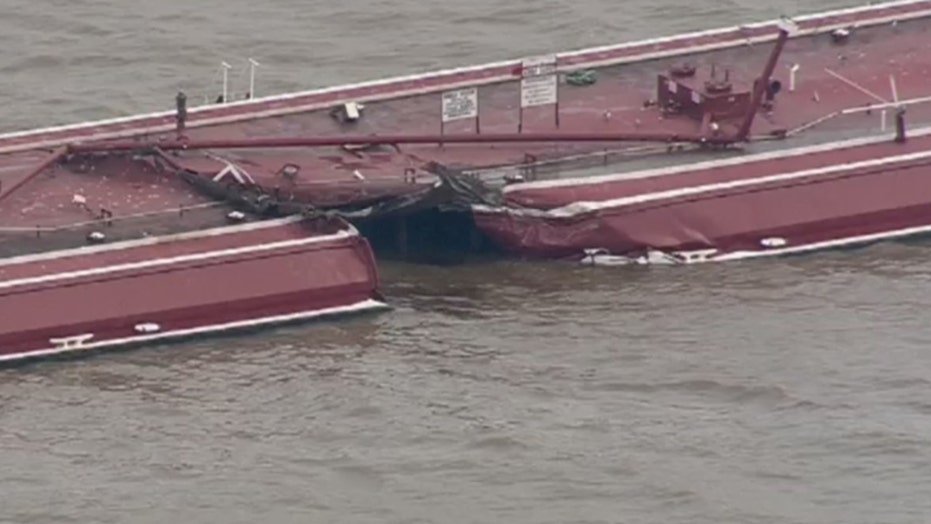 A tugboat carrying two barges collided with a 755-foot oil tanker in the Houston Ship Channel on Friday, causing one of the barges to sink and spilling chemicals used to make gasoline into the water.

A tugboat carrying two barges collided with a 755-foot oil tanker in the Houston Ship Channel on Friday, causing one of the barges to sink and spilling chemicals used to make gasoline. (KRIV)

The tugboat named Voyager was moving two barges filed with thousands of barrels of gasoline stock reformate when it collided with the tanker around 3:30 p.m. near Bayport, Texas, according to KHOU 11.

The channel is currently closed as nearly 9,000 barrels of Reformate have spilled into the water and Coast Guard Captain Kevin Oditt says they are still working to reopen it.

"An estimated 25,000 barrels of gasoline blend stock were loaded on each barge. An unknown amount of product has been released from the damaged barge," the Coast Guard said in a statement on Friday.

"Air monitoring is being conducted along the shoreline from Sylvan Beach to Kemah," the Coast Guard said. "The first priority of the unified command is public safety. If any readings above actionable levels are detected, advisories will be provided to local emergency operations centers."

The National Weather Service Houston (NWS) tweeted out an infographic showing what areas of Houston should expect the highest odor from the spill.

Officials say the tested samples of Reformate don't pose a risk to local residents at this point and the Center for Toxicology and Environmental Health is currently monitoring nearby communities.

For concerned residents in the area with a preexisting health condition, Galveston County officials recommend staying inside and avoiding the coastlines along Kemah, Clear Lake Shores, Bacliff, San Leon and League City.