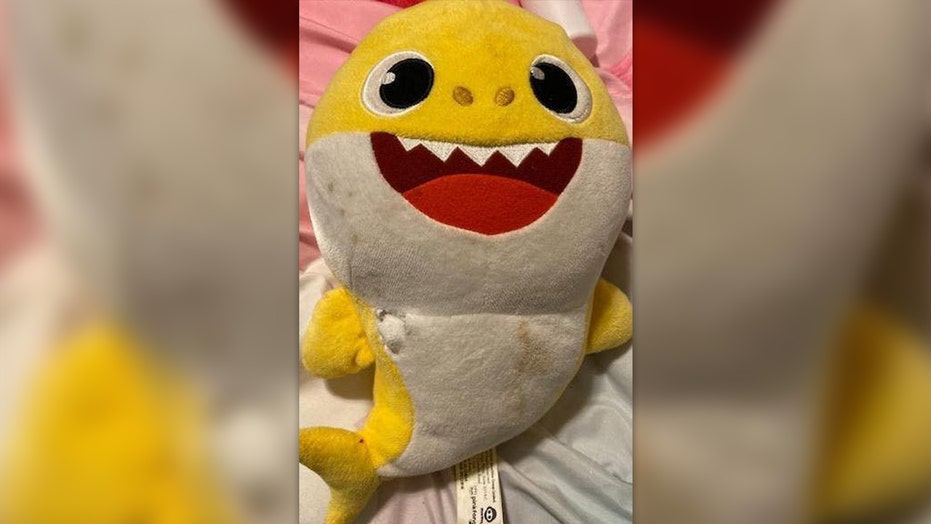 A “Baby Shark” doll narrowly saved the life of a toddler after absorbing a stray bullet that ripped through the walls of her family’s Madison home on Sunday, according to police.

The Madison Police Department (MPD) said the 3-year-old girl was sleeping in her crib when a gunfight erupted outside around 8:42 p.m. on Sunday.

Police say a bullet narrowly missed a toddler after it was absorbed by a "Baby Shark" toy.  (Madison Police Department)

Investigators discovered 45 shell casings in the area, indicating “there were two sides shooting at one another,” the MPD said in an incident report.

The bullets hit parked cars and multiple homes, prompting residents to seek shelter, police said. One of the bullets entered the toddler’s bedroom where she slept, missing her by inches, according to police.

OHIO BOY, 11, FATALLY SHOT AT BIRTHDAY PARTY: ‘HE WAS A REAL GOOD KID’

Fox 8 reported that the toddler was holding the “Baby Shark” toy when it was hit by a bullet.

Another bullet hole was discovered about a foot from where the toddler had laid her head, Channel 3000 reported.

A photo of the toy shared by police shows where the bullet ripped through.

A close-up of the bullet hole in the "Baby Shark" toy that police say saved the life of a toddler. (Madison Police Department)

Officers are continuing to investigate the shooting. No injuries have been reported. Anyone with information is asked to call 608-266-6014.