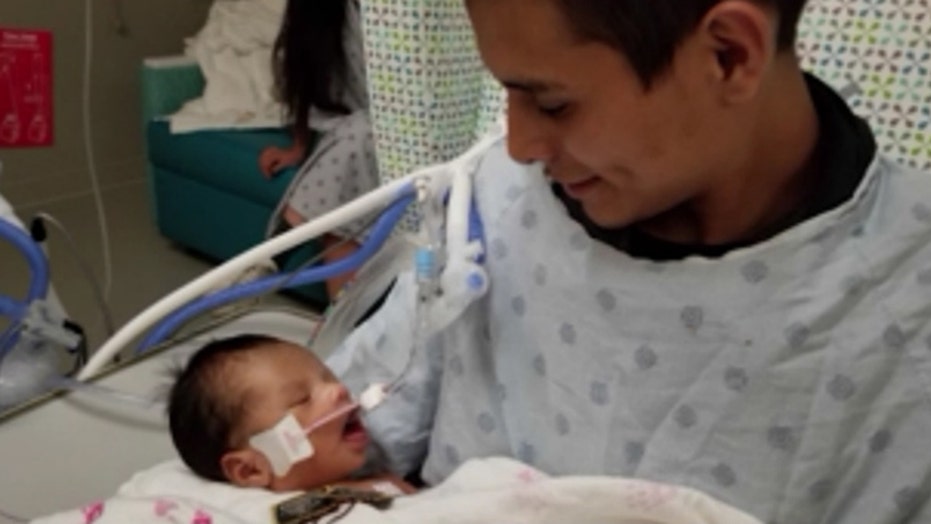 A baby cut from the womb of a murdered Chicago teen died Friday morning after spending weeks on life support in a long-shot bid to save his life, a family spokesperson says.

Yovanny Jadiel Lopez – the son of 19-year-old Marlen Ochoa-Lopez, who was killed April 23 when she was nine months pregnant – died at 5 a.m. after his condition quickly deteriorated.

"It is with great sadness that we inform you of the passing of baby Yovanny Jadiel Lopez,” the family’s spokesperson, Julie Contreras, said in a statement. “He passed away… from his severe brain injury. Please keep his family in your thoughts and prayers as they go through this difficult time."

Yovani Lopez holds his son, Yovanny Jadiel Lopez, in the hospital in this photo released by family members.

The death comes after the family had expressed signs of hope in early June, saying at a news conference that Yovanny was “fighting and surviving” – and at one point, was able to breathe without the help of a machine.

The baby’s family is now making funeral arrangements for him, according to FOX32 Chicago.

Clarisa Figueroa, 46, and her 24-year-old daughter, Desiree Figueroa, were charged Wednesday with first-degree murder in the death of Ochoa-Lopez, whose body was found in a garbage can behind the Figueroas' house on the Southwest Side of Chicago. Clarisa Figueroa's boyfriend, Piotr Bobak, is charged with concealing a homicide.

Authorities contend that, not long after Clarisa Figueroa's adult son died of natural causes, she told her family she was pregnant. They say she plotted for months to acquire a newborn, and that she posted an ultrasound and photos of a room decorated for a baby on her Facebook page. In March, she and Ochoa-Lopez connected on a Facebook page for pregnant women.

Marlen Ochoa-Lopez was lured to a home on the southwest side of Chicago in late April and strangled before her baby was cut out of her, according to police. (Cicilia Garcia)

The two first met in person around April 1, when Ochoa-Lopez went to the Figueroas' house and left unharmed, prosecutors say. The teen returned April 23 to accept Clarisa Figueroa's offer of free baby clothes, they say, and, as Desiree Figueroa was showing Ochoa-Lopez a photo album of her late brother to distract her, Clarisa Figueroa sneaked up behind her and strangled her with a cord.

Once Ochoa-Lopez stopped showing signs of life, Clarisa Figueroa cut the baby from her womb and she and her daughter wrapped the teen's body in a blanket, put it in a plastic bag and dragged it outside to a garbage can, according to prosecutors.

Later that day, Clarisa Figueroa called 911 claiming her newborn baby wasn't breathing. When first responders arrived, the child was blue. They tried to resuscitate the infant and took him to a hospital, where he remained until Friday in critical condition. Police said the baby suffered severe brain damage and was unlikely to survive.

The defendants are due back in court June 26.