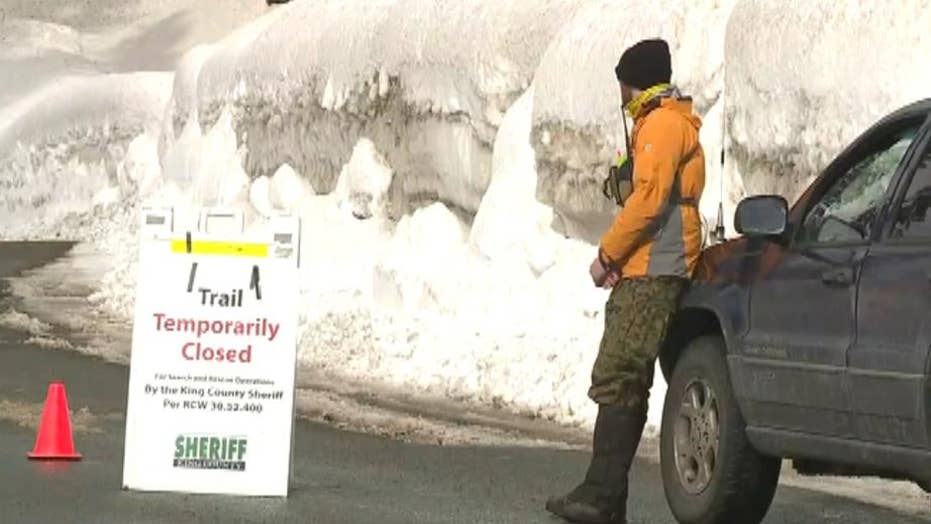 The bodies of two teenage boys were found in a backcountry area in Washington state on Monday after an avalanche struck the area over the weekend, a day after a man was killed in a separate slide.

The King County Sheriff's Office said searchers found the boys, ages 17 and 18, just before noon on Monday, after the two went missing while snowshoeing near the Alpental ski area in Snoqualmie Pass, located 50 miles east of Seattle.

“Our hearts and prayers go out to that family,” King County Search and Rescue's Alan Labissoniere told Q13 FOX.

One of the teens was also an experienced snowshoer, according to Labissoniere.

Two teenagers were killed in an avalanche near the Alpental ski area in Snoqualmie Pass, Washington. (Q13 FOX)

The parents of the teenagers, who have not yet been publically named, called 911 on Sunday night when the two friends did not return home and made the trek up to the area on Monday as rescuers searched for the pair.

“These were some young folks. I even had a hard time, too, dealing with the family up there," he said.

AVALANCHES KILL 11-YEAR-OLD GIRL AND HER FATHER IN FRANCE, INJURE 2 IN SWITZERLAND

Another round of snow over the weekend presented avalanche dangers that prevented rescue teams from looking for the teenagers until Monday.

“It’s too extreme," Labissoniere said. "We held our team members back last night for our safety, it’s not worth to risk more lives."

The Northwest Avalanche Center had said the avalanche danger was "high" over the weekend, according to KIRO, and there was an ominous warning which read: "Many of these could be big enough to kill you."

In a separate incident, a 32-year-old man was killed in an avalanche at Stampede Pass about 13 miles away on Sunday, according to the Kittitas County Sheriff's Search & Rescue.

A 32-year-old man snowmobing was friends was killed in an avalanche on Sunday at Titled Mirror Lake near Stevens Pass in Washington. (Kittitas County Sheriff)

The agency said Joseph Simenstad was killed while snowmobiling with his wife and several friends in the area of Mirror Lake when the slope above them broke free as they stopped for a break to have lunch.

One man in the group lost consciousness after being hit by the slide but was able to be revived. Simenstad's wife also suffered minor injuries but survived, according to rescuers.

"We would like to remind those of you who recreate in the backcountry to be cautious of the past and current conditions, as they can change rapidly and without warning," Kittitas County Undersheriff Clayton Myers said in a statement. "Avalanche conditions are often the result of previous weather, sometimes from weeks prior. We encourage you to research and educate yourselves from the many sources available. Just Google ‘Avalanche Danger'."