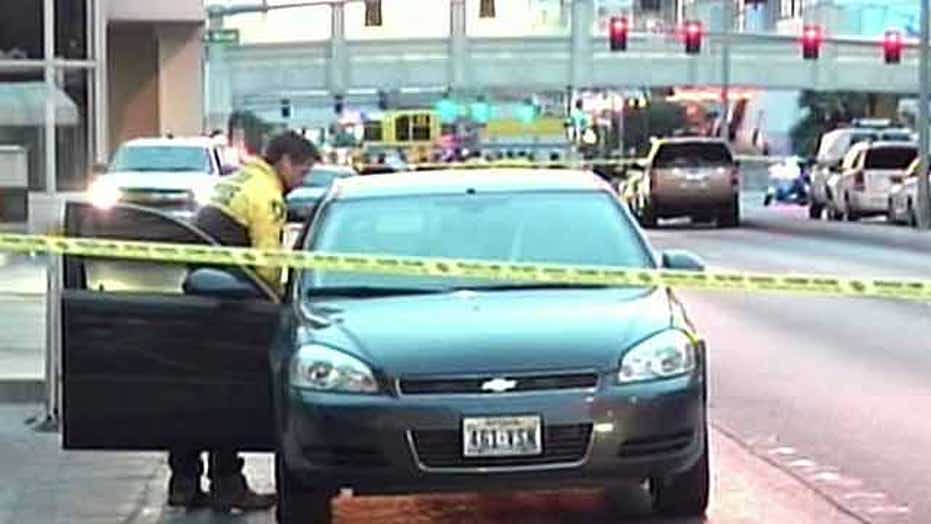 Police searched Friday for a Range Rover with dark tinted windows and custom rims that set off a fiery crash on the Las Vegas Strip when someone in the luxury SUV opened fire on a Maserati driven by an aspiring rapper.

"Right now my heart is breaking," Sims said. "This has really been a tragedy. Kenny was just a delightful kid."

Sims, 75, said Cherry recently moved from Northern California to Las Vegas, though she didn't know her nephew was a rapper using the name Kenny Clutch. Cherry was particularly close with his 106-year-old grandmother.

"I haven't been able to tell her," Sims said of her mother.

A taxi driver and his female passenger were also killed when the cab they were in was hit and exploded in flames.

The cab driver, Michael Boldon, 62, was a father and grandfather with a passion for fast cars, his younger sister, Carolyn Jean Trimble, told the AP.

Bolden was born and raised in Michigan and had been driving taxis since he moved to Las Vegas about 1 1/2 years ago. He loved watching car races and drove a Mercedes when he wasn't in a cab.

"Everybody just loved him," Trimble said. "When that car hit that cab, Mike had to be in there talking and laughing."

At least six other people, including a passenger in the Maserati, were injured in what marked the latest in a series of violent episodes in Las Vegas in recent months. Police said each was treated for injuries that were characterized as minor.

Clark County Sheriff Doug Gillespie told reporters the shooting was sparked by an argument in the valet area of the nearby Aria hotel-casino, and spilled over to one of the busiest intersections on the Las Vegas Strip. As bullets flew from the Range Rover, the Maserati ran a red light and smashed into the taxi that exploded into flames.

Police have not released the identities of the victims, but said the Maserati passenger was cooperating with police.

Three more cars and a utility truck also collided as the Range Rover sped off in the darkness at about 4:30 a.m. Thursday.

Las Vegas police officer Jose Hernandez said Friday the Range Rover was sought in Nevada and neighboring states of California, Utah and Arizona. It had a car dealer's advertisement in place of a license plate.

It was last seen near the Venetian resort as it headed north from the shooting scene, and police have video from traffic cameras at the intersection and were checking hotel surveillance systems. Police have said the video will not be made public.

Jogger Eric Lackey was on his way back to the New York-New York hotel when he snapped a cellphone photo of the blazing scene moments after the crash. Black smoke billowed from the flaming taxi, amid popping sounds from the fire.

Lackey, of Forest Hill, Md., said a security officer in a yellow shirt performed CPR on a person on the sidewalk while police officers canvassed a small crowd of perhaps 15 onlookers gathering at the scene.

"Police were asking if anyone was still in the vehicles and if they heard gunfire," Lackey told The Associated Press. "That's when I realized it wasn't just a regular accident."

The effects of the shooting and crashes were felt hours later as the Strip remained closed, leading to snarled traffic, until it reopened late Thursday night.

"We get stabbings, and gang violence," said Mark Thompson, who was visiting from Manchester, England, with his wife, "but this is like something out of a movie. Like 'Die Hard' or something."

Witnesses also told police the SUV and Maserati had come from the nearby CityCenter area, the home of Aria, just south of the site of the attack.

"We have numerous witnesses to this," police Sgt. John Sheahan said. "But what is the genesis of this? We don't know yet."

The crumpled, gray Maserati, which had no license plate, came to rest several feet away from the incinerated taxi.

"The people I feel sorry for are the people in the taxi," said Elvina Joyce, a tourist from Regina, Saskatchewan. "Seconds made all the difference in the world for them. Wrong place, wrong time."

The area near the scene has been the site of high-profile violence in the past.

Rapper Tupac Shakur was killed in a drive-by shooting in 1996 about a block away under similar circumstances, as assailants opened fire on his luxury sedan from a vehicle on Flamingo Road. The killing has never been solved.

And Las Vegas has had several violent episodes in recent months.

Two people were critically wounded in a shooting at a parking garage on Feb. 6, and a tourist was stabbed last Saturday in an elevator at The Hotel at Mandalay Bay.

On New Year's Eve at Circus Circus, a man pulled out a revolver and fired it into the ground just off the main floor of the casino. Less than two weeks earlier, a woman allegedly slashed the face of a blackjack dealer at the Bellagio.