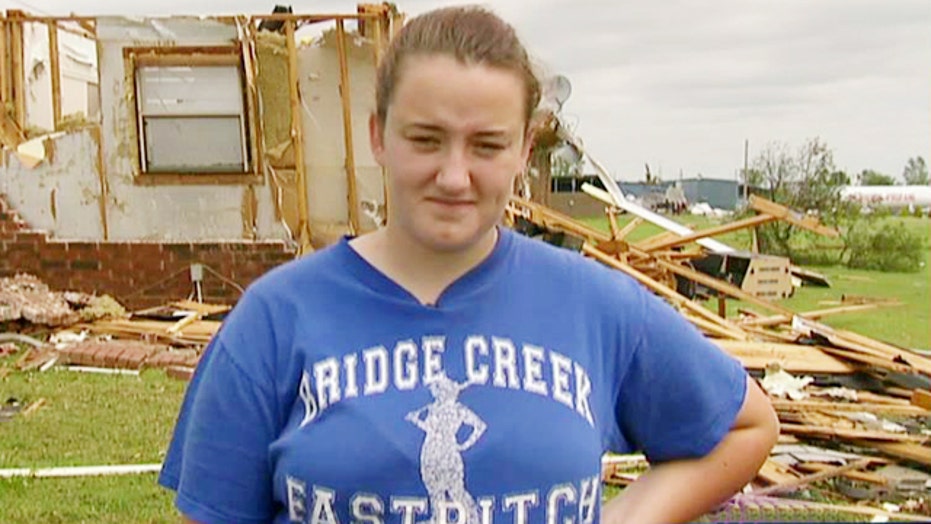 OKLAHOMA CITY – Authorities are set to survey the damage that was left behind after tornadoes swept through the southern plains, overturning cars and destroying dozens of homes near Oklahoma City Wednesday night.

At least 12 people were injured, but no deaths were immediately reported from the twisters that also whipped through rural parts of Texas, Kansas and Nebraska.

"We'll have much better picture of how widespread the damage is when the sun comes up tomorrow," meteorologist Forrest Mitchell with the National Weather Service in Norman said.

The Oklahoma City area seemed to be the hardest hit. A twister destroyed homes in Grady County and it appeared another tornado touched down in the area later Wednesday when a second storm came through.

"We do strongly think there was a tornado on the south side of Oklahoma City," meteorologist Michael Scotten said after the second storm that hit around 8:40 p.m.

The stormed flipped vehicles over vehicles on Interstate 35 and left power lines strewn across the roadway, Scrotten said.

Lara O’Leary, a spokeswoman for Emergency Medical Services Authority, said late Wednesday that the company transported 12 patients from a trailer park in south Oklahoma City to local hospitals. She did not give further details about the extent of the patients’ injuries.

Grady County Emergency Management Director Dale Thompson said about 10 homes were destroyed in Amber and 25 were destroyed in Bridge Creek. As the storm moved to the east, forecasters declared a tornado emergency for Moore, where seven children were among 24 people killed in a tornado disaster two years ago. When the first storm hit Wednesday, school districts held their pupils in safe places.

At Will Rogers World Airport in Oklahoma City, people were twice evacuated into a tunnel outside the security zone. Flights were canceled for the rest of Wednesday evening shortly after 10 p.m. local time.

The same tornado in Grady County prompted fears that exotic animals had escaped a zoo in Tuttle. However, all animals were soon accounted for, Alisa Voegeli, a dispatcher at the sheriff’s office said.

After tornadoes passed through, flash flooding became a major concern.

The National Weather Service received reports of 5 to 8 inches of rain in the area, Mitchell said. A measurement of 7.1 inches at the Oklahoma City airport set a daily rainfall record, he said. It topped the previous record of 2.61 inches. Residents were warned of "deadly and dangerous" conditions and told to stay home.

Oklahoma City spokeswoman Kristy Yager told The Associated Press the rainfall prompted the city to issue a flash flood emergency for the first time in history.

The Storm Prediction Center had warned that bad weather would come to Tornado Alley, and more storms were possible later in the week, with flooding a major concern.

O'Leary said the ambulance service responded to water rescues "all over" the Oklahoma City metro area. Two ambulance crews required also assistance after getting stuck in high water, she said.

In Nebraska, 10 to 15 homes were damaged near Grand Island, and between Hardy and Ruskin, near the Kansas line.

At least nine tornadoes were reported in Kansas, the strongest of them in the sparsely populated north-central part of the state. That included a large tornado near the tiny town of Republic just south of the Nebraska state line, where some homes were damaged. In Harvey County, a tornado destroyed a hog barn and damaged trees, according to the National Weather Service.