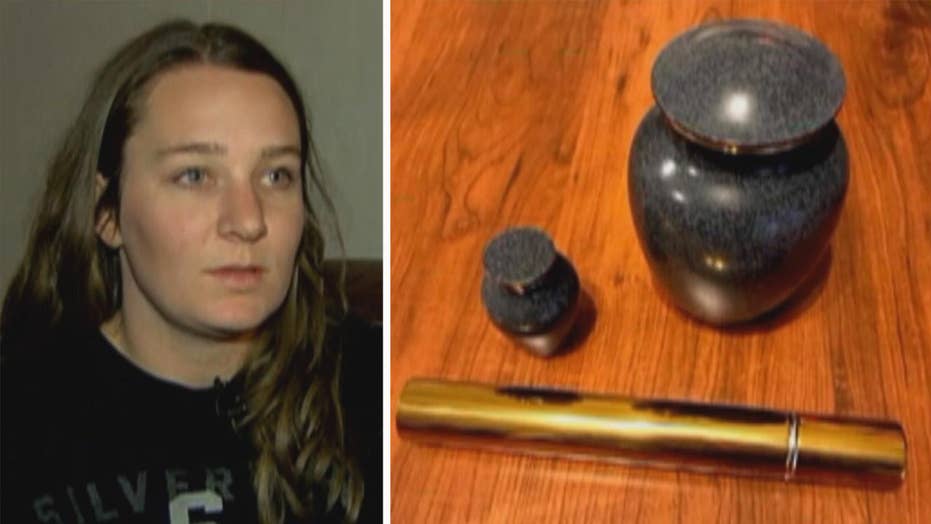 Arizona woman heartbroken after her father's remains were stolen from her porch.

A $10,000 reward is being offered by the postal service after someone stole a package containing a man’s ashes from the doorstep of his daughter’s home in Arizona.

Elyse Brink told Tucson News Now her neighbor saw the package on her porch Tuesday but when she arrived home, it was gone. She searched the area, including nearby trash cans, to no avail. Brink had planned a trip to California to bring the ashes to her brother.

“This was the final step in the process of me saying goodbye to my dad and making the arrangements and sending him home here. And to know that he was so close and then taken. It just breaks my heart,” she said.

The package should not have been left on the porch without a signature, the Oklahoma City funeral home told Tucson News Now.

An urn, similar to the one pictured above, was stolen from Elyse Brink's front porch in Tucson, Arizona. (Tucson News Now)

Officials with the U.S. Postal Inspection Service said they’ve launched a probe since the package should not have been left on the porch without someone signing for it. The $10,000 reward will only be given if the information provided leads to an arrest in the case.

"Our goal now is to get the word out. I was just out on an arrest early Sunday morning and the patrol officers know about this," Postal Inspector Dan Grossenbach told Fox News by phone. "There's such an all-out blitz with law enforcement. In my experience, people that are stealing mail may continue to do so until there's an arrest."

Brink hopes the ashes are returned. Grossenbach said he's optimistic that the case will be resolved.

“They are a physical reminder of him," she said, adding that if she gets the urn back "he would be proud of me.”