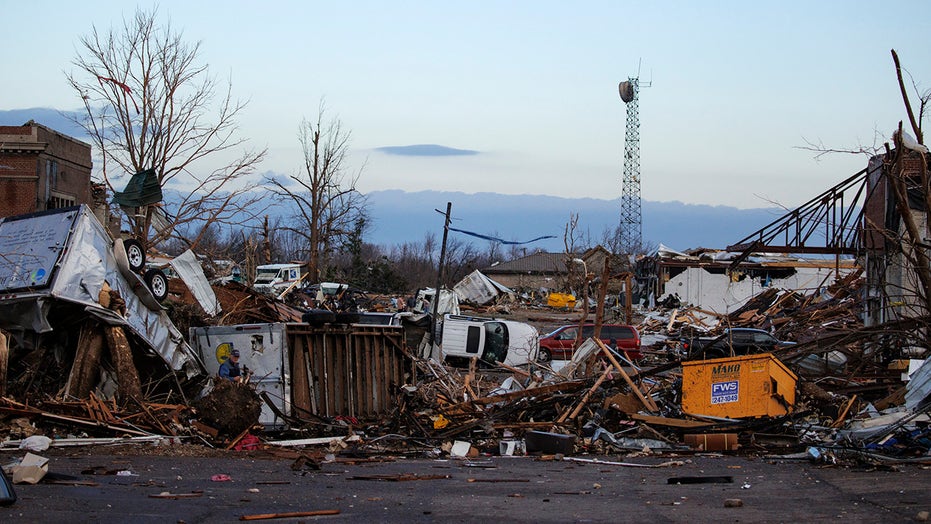 Kentucky Gov. Andy Beshear holds a press briefing after a severe storm swept through the state overnight causing a 'significant loss of life'

Major incidents included heavy damage to an Amazon warehouse in Edwardsville, Illinois, where two people are confirmed dead and dozens of workers were reportedly trapped inside the building, and the destruction of a nursing home in Arkansas, where at least two people were killed and five were hurt, according to reports.

The Amazon collapse – just across the Mississippi River from St. Louis – was being called a "mass casualty incident" by local emergency responders. At least 30 people were bused away from the scene to be reunited with family, officials said.

As many as 50 to 100 employees were believed to be inside the building, FOX 2 of St. Louis reported.

First responders work outside an Amazon fulfillment center after it was heavily damaged when a strong thunderstorm moved through the area Friday, Dec. 10, 2021, in Edwardsville, Ill.  (Associated Press)

Amazon is "deeply saddened by the news that members of our Amazon family passed away as a result of the storm," a spokesperson told Fox News.

"Our thoughts and prayers are with the victims, their loved ones, and everyone impacted by the storm," said Kelly Nantel, Amazon spokesperson. "We also want to thank all the first responders for their ongoing efforts on scene. We’re continuing to provide support to our employees and partners in the area."

"My prayers are with the people of Edwardsville tonight," Pritzker wrote, "and I've reached out to the mayor to provide any needed state resources."

In St. Charles County, Missouri, to the west of St. Louis, at least one person was killed and three injured when a tornado struck in the town of Defiance, according to FOX 2.

In Craighead County, Arkanas, emergency responders were dealing with a tragedy at the Monette Manor Nursing Home in Monette, FOX 16 of Little Rock reported.

The nursing home’s roof was ripped off and other buildings in town also were damaged, according to FOX 16.

Survivors were being directed to a local church to reunite with loved ones, the station reported.

Another fatality was reported at a Dollar General store in Leachville, according to The Weather Channel.

Kentucky Gov. Andy Beshear warned the commonwealth's residents Saturday that the tornado death toll there will exceed 70 after a candle factory in Mayfield with around 110 people inside was flattened.

He said a single tornado ripped across the state for more than 200 miles.

Earlier, the governor declared a state of emergency after major tornado damage was reported in the western part of the state.

Beshear called it the "most devastating tornado event in our state's history."

"It is indescribable," he continued. "The level of devastation is unlike anything I have ever seen."

"Loss of life is expected," in western Kentucky, the Kentucky State Police wrote on Twitter.

"People that weren't even official first responders been up all night trying to help their friends and neighbors and family," Rep. James Comer, R-Ky., told "Fox & Friends Weekend." "Just a devastating thing to go through the community and just something that you hope you never have to witness." 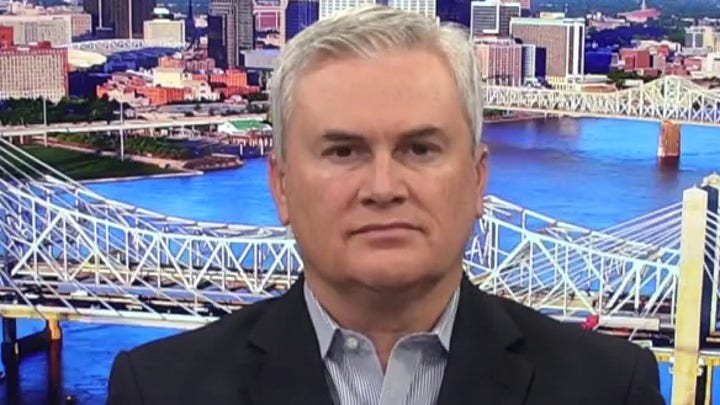 In Madisonville, Kentucky, a freight-train derailment was reported shortly after midnight, related to severe weather. No injuries were immediately reported, a spokeswoman for rail company CSX Corp. told Fox News.

At least two people were confirmed dead in Obion County, Tennessee, after dangerous storms tore through the area, FOX 17 of Nashville reported. No details were immediately available on how the deaths occurred.