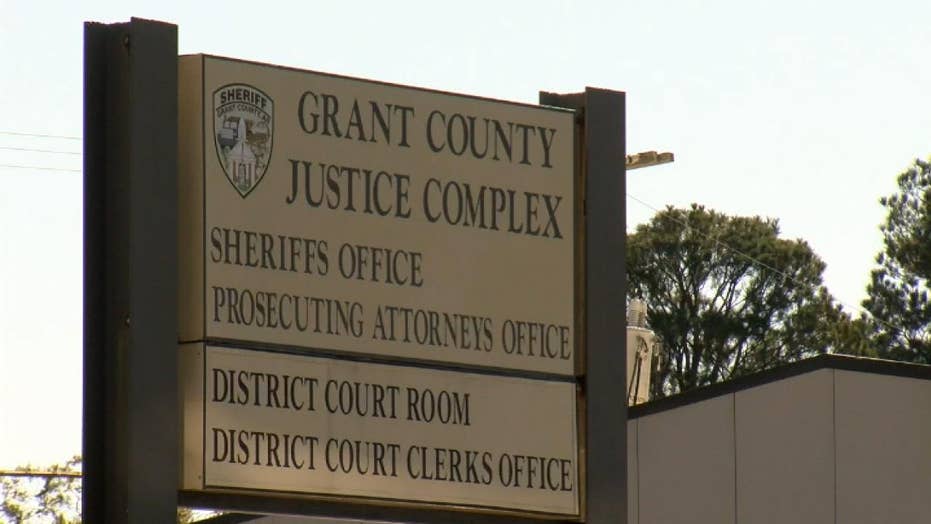 Man on trial walks out of courthouse as jury deliberates

Raw video: A man walks out of his own court hearing while a jury was finding him guilty of a number of charges in Grant County, Arkansas.

An Arkansas man facing charges of aggravated assault and felony possession of a firearm was captured on video casually walking out of a courtroom, down the hall and out of an Arkansas courthouse on Monday as the jury was deliberating his case.

Surveillance footage showed Joey Watts sitting next to his attorney while on trial at the Grant County Courthouse in Sheridan. He then got up and walked out of the courtroom down the stairs, down the hallway -- where he said something to his family waiting nearby -- and then left the building.

The jury already had convicted Watts on the assault charge when he decided to make a “run” for it, which Deputy Prosecutor Norman Frisby said Watts' attorney had not encouraged, Fox 16 reported.

ARKANSAS WOMAN TEXTED FATHER'S NUMBER EVERY DAY AFTER HE DIED, SHE GOT A RESPONSE FOUR YEARS LATER

Watts was accused of using a shotgun to threaten a woman in his home on Nov. 29, 2018, Frisby said.

Grant County Sheriff's Office Chief Deputy, Pete Roberts said that Watts had been out on bond -- which allowed him to walk around.

“Mainly the fact that he was not in custody, and he was not an inmate, that gave him the freedom to move around throughout the courthouse and things like that,” Roberts said, according to the outlet.

He added the court didn't have a second bailiff, which he said could prevent this from happening again.

BRAD PITT, OTHERS CAN BE SUED OVER NEW ORLEANS HOMES: JUDGE

“The circuit court is in the process of hiring a new bailiff to prevent that, but they haven’t had that done yet,” he said.

Watts was apprehended on Tuesday evening and he found guilty of both charges the next day. Roberts said three others have been facing charges for allegedly helping him and he believed more arrests will follow.

“We want to make it clear that anyone that helped him is now facing Class C felony charges also,” Roberts said.

Watts was sentenced to 36 years in prison -- 10 years for the assault charge and 26 years for possession of a firearm.