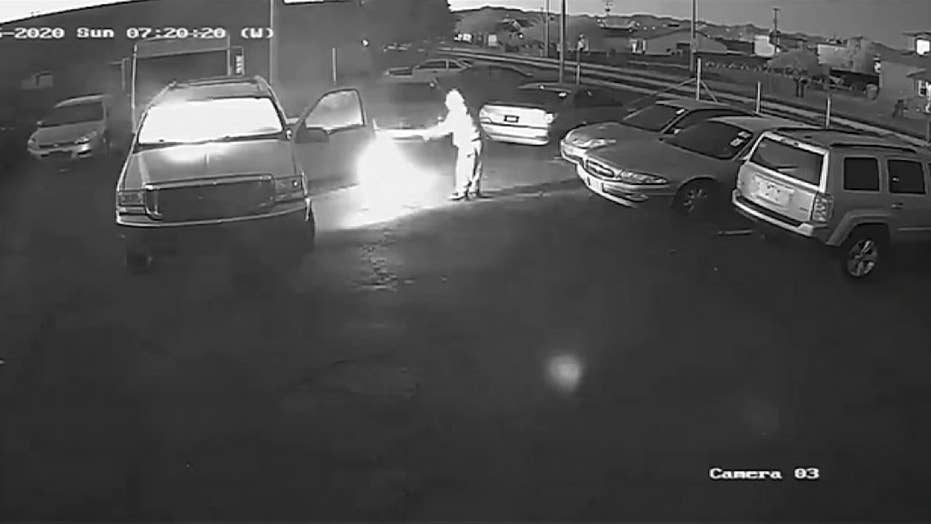 Arizona authorities are looking for an arson suspect who was caught on surveillance video setting five vehicles on fire in a parking lot.

The Phoenix Police Department said on Facebook the incident happened at 7 a.m. on Jan. 5 in the parking lot of Reliable & D-Pendable Auto Sales in Phoenix.

Officials said the suspect cut a chain-link fence early on a Sunday morning to get into the auto dealer parking lot.

In the video released by police, the man can be seen moving from vehicle to vehicle, setting each on fire.

A man can be seen setting vehicles on fire in the parking lot of a business earlier this month in Phoenix. (Phoenix Police Department)

"He obviously came prepared for this," Sgt. James Rothchild told FOX10. "He was trying to hide who he is, but he had the items he needed to light those vehicles on fire pretty quickly."

Officials said the man was wearing a hoodie, gloves and a mask.

There may be an important clue to help investigations. During the incident, the suspect appears to burn his own hands at one point and may have sustained injuries.

"Maybe someone knows someone who recently suffered a burn and that information would help us, too," Rothchild told FOX10.

Anyone with information about the case is asked to contact Silent Witness at 480-948-6377 or submit tips online.