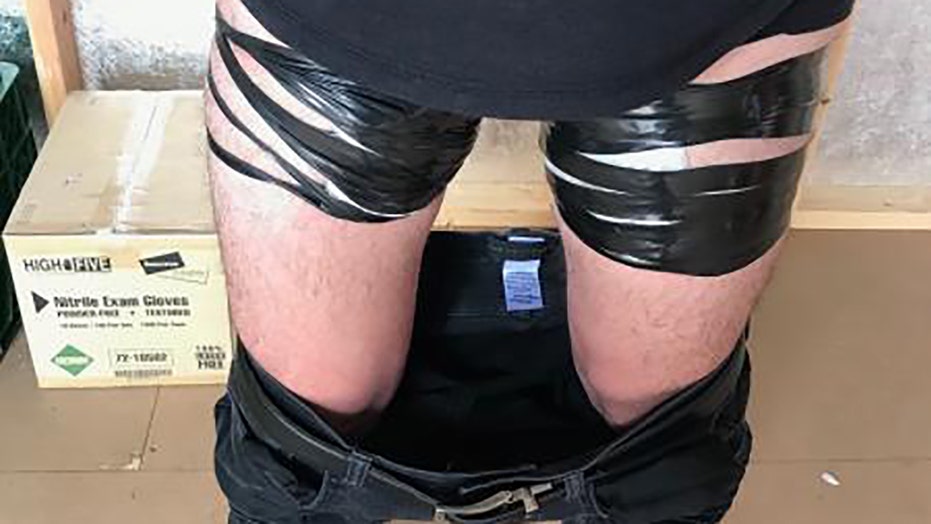 A would-be drug smuggler was thwarted in Arizona last week after border agents discovered bags of fentanyl taped to his thighs, authorities said

Agents questioned a 19-year-old U.S. citizen during a routine immigration inspection of a passenger shuttle at the Interstate 19 Immigration Checkpoint near Amado, about 30 miles north of the U.S.-Mexico border, Customs and Border Protection said Friday in a news release.

Agents conducted a search and found bags of pills strapped to the man's thighs with what appeared to be electrical tape, the CBP said. The pills, which tested positive for fentanyl, totaled 243 grams. A dose of just 2 milligrams of fentanyl can be fatal, according to experts.

The man, whose identity was not released, was arrested and charged with conspiracy to possess with intent to distribute.

The CBP did not name the 19-year-old man who they said was discovered with bags of fentanyl pills taped to his thighs. (U.S. Customs and Border Protection)

The CBP release did not state where the man had obtained the pills or where he was heading.

President Trump has made combating fentanyl smuggling as one of his administration's most important goals, giving the Department of Health and Human Services $1.8 billion to help states and communities fight the crisis he’s described as a “war-like situation.”

Fentanyl is a synthetic opioid 50 times more potent than heroin. The substance was involved in 39 percent of the 70,000 overdose deaths that occurred in 2017, according to data compiled by the Centers for Disease Control and Prevention.

Overdose deaths related to fentanyl and other synthetic opioids have skyrocketed by more than 800 percent since 2013, health officials said.