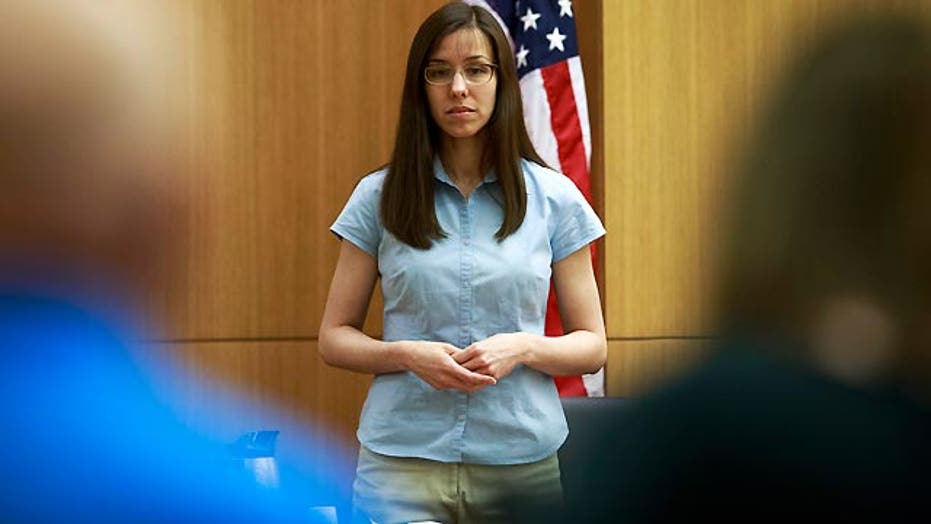 Admitted killer testifies in her own defense at murder trial

A soft-spoken and calm Jodi Arias laid out the story of her life in painstaking detail, beginning with the day she killed her lover.

She went on to recount a series of tumultuous -- and sometimes bizarre -- events from her upbringing: An abusive childhood at the hands of her parents. A high school boyfriend who believed in vampires and tried to strangle her. Dropping out of high school to support herself. A belief in the imminent second coming of Jesus Christ. Deceit, lies, sex and naivete.

"Did you kill Travis Alexander on June 4, 2008?" asked her defense attorney Kirk Nurmi.

"Yes I did," Arias replied softly. "He attacked me and I defended myself."

Arias took the witness stand Monday in a surprise move aimed at bolstering her case that the killing was self-defense. She told jurors of her childhood and explained the path that brought her to Alexander's home on the day she killed him.

Arias is charged with killing Alexander, 30, a successful businessman and motivational speaker, in what prosecutors describe as a jealous rage after she found out he'd planned to take a trip to Mexico with another woman. She faces the death penalty if convicted, and is set to return to the stand Tuesday.

Authorities say she stabbed and slashed him 27 times, slit his throat from ear to ear and shot him in the forehead, leaving his bloody body in the bathroom of his suburban Phoenix home to be found five days later by friends.

The trial began in early January with salacious details about a torrid romance between Arias and Alexander after they met at a conference in Las Vegas in late 2006. She claims they dated for about five months, then broke up but continued to see each other for sex up until the day of his death. She initially told police she knew nothing of the killing, then later blamed it on masked intruders. She eventually admitted her involvement, but claimed self-defense.

She said she lied early in the investigation about not being at the scene of the killing because she planned to commit suicide and never have a trial.

"At the time, I had plans to commit suicide. So I was extremely confident that no jury would convict me because I didn't expect any of you to be here," Arias told jurors. "I planned to be dead."

She calmly described how an idyllic childhood in California turned abusive when she was about 7. She said her parents beat her with belts and wooden spoons, and the abuse later escalated into shoving her into furniture and slapping her in the face for misdeeds such as sneaking out of the house.

Her mother sat in the front row of the courtroom and showed no emotion as Arias described her childhood.

Arias recounted other stories from her youth, describing how she met her high school boyfriend at a carnival when she was 15 and he was 18. Arias said she broke it off because "he had all kinds of wild ideas."

"He entertained the belief in vampires," she said, adding that he wanted the pair to move to San Francisco to hunt them.

She said months after she broke up with him, she learned he was so distraught over the relationship that he had slit his wrists and tried to kill himself.

Arias said she reconnected with him about "19 months" later after a man she met in her father's restaurant had told her that the "second coming" of Jesus Christ would occur in late 1997.

"I was really naive and I kind of believed him," Arias testified. She wanted to warn her former boyfriend, she said.

But she said it wasn't long until the relationship turned stormy. She came across romantic emails he exchanged with another woman. He later tried to strangle her, she said, and told her "how he would kill each member of my family."

Her defense attorney asked repeatedly why she stayed with a man like that, apparently attempting to establish a history of such relationships and submissiveness in a move to compare how Alexander treated her.

"It just felt natural," Arias replied. She was in love.

Throughout the trial, defense attorneys have depicted Alexander as a liar and a cheater who told Arias and other girlfriends he was a devout Mormon saving sex for marriage, while in reality he was having sex with other women.

Prosecutors have portrayed Arias as a jealous ex-girlfriend who stalked him for months after their breakup until finally snapping and killing him.

Authorities say they found her hair and bloody palm print at the scene of the killing, along with time-stamped photographs on a camera discovered inside Alexander's washing machine that place Arias there on the day he died. The photos included one of Arias nude on his bed, one of Alexander alive in the shower, then one of his body on the bathroom floor.

Defense attorneys have yet to explain why Arias apparently attempted to clean the scene, washing Alexander's bedding and the camera, and what happened to the weapons.

Authorities say Alexander was shot in the head with a .25 caliber gun, the same caliber Arias' grandparents reported stolen from their Northern California home about a week before the killing.