An explosive wildfire that's caused thousands to evacuate from their homes in Southern California is sending smoke hundreds of miles to the east, giving residents in Arizona a bright red sun in the sky.

The Apple Fire has scorched more than 32 square miles of dry brush in the mountains east of Los Angeles, after exploding in size over the weekend.

The California Department of Forestry and Fire Protection (Cal Fire) said as of Monday morning the blaze is only 5 percent contained after charring some 20,516 acres.

The National Weather Service (NWS) said Sunday that a "large area of smoke" from the blaze was drifting over western Arizona.

Satellite imagery showed a large swath of smoke from the wildfire covering the area.

Smoke from the Apple Fire in Southern California can be seen spreading over western Arizona. (NWS Tucson)

"This smoke extends from The Sea of Cortez,  Lake Havasu, Phoenix, and Payson," the NWS forecast office in Flagstaff tweeted.

Forecasters said the smoke stuck around through the day due to weak winds and high pressure centered over the area.

The smoke could be seen in satellite imagery, showing up on green as opposed to storm clouds further east that appeared with a red-orange shade.

Smoke (in green) from the Apple Fire in Southern California can be seen spreading over western Arizona. (NWS Phoenix)

The high-pressure system allowed the smoke to remain "mostly stagnant" over the region.

Residents in the Phoenix area, located about 300 miles from where the fire in California is burning, were greeted with a bright red sun as they woke up in the morning.

Smoke or dust in the sky can cause the sun to take on an orange or red hue, according to FOX10.

The Apple Fire in Riverside County began as two adjacent fires reported Friday evening in Cherry Valley, an unincorporated area near the city of Beaumont about 85 miles east of downtown Los Angeles.

Evacuation orders and advisories were issued for about 8,000 people in mountain, canyon and foothill neighborhoods.

Cal Fire said the blaze remains under investigation but has destroyed one home and two outbuildings. No injuries have been reported.

The Apple Fire has burned more than 20,516 acres and is only 5 percent contained as of Monday morning. (San Bernardino National Forest)

On Sunday, officials allowed flames to run up the side of Mount San Gorgonio, an 11,000-foot peak, because it wasn't safe to let crews work in such steep, rugged terrain, according to Lisa Cox, a spokeswoman for the U.S. Forest Service.

“We don’t want to put firefighters in a dangerous situation,” Cox told the Riverside Press-Enterprise. “It’s burning in a straight line up a mountain.”

The huge smoke plume generated by the blaze that's visible for miles around has also contributed to poor air quality.

A smoke advisory has been extended through Monday for the Coachella Valley, San Gorgonio Pass and Hemet-San Jacinto Valley due to the fire.

The South Coast Air Quality Management District urged residents in the area who smell smoke or see ash to limit their exposure by remaining indoors with windows and doors closed or to seek alternate shelter, and avoid vigorous physical activity. 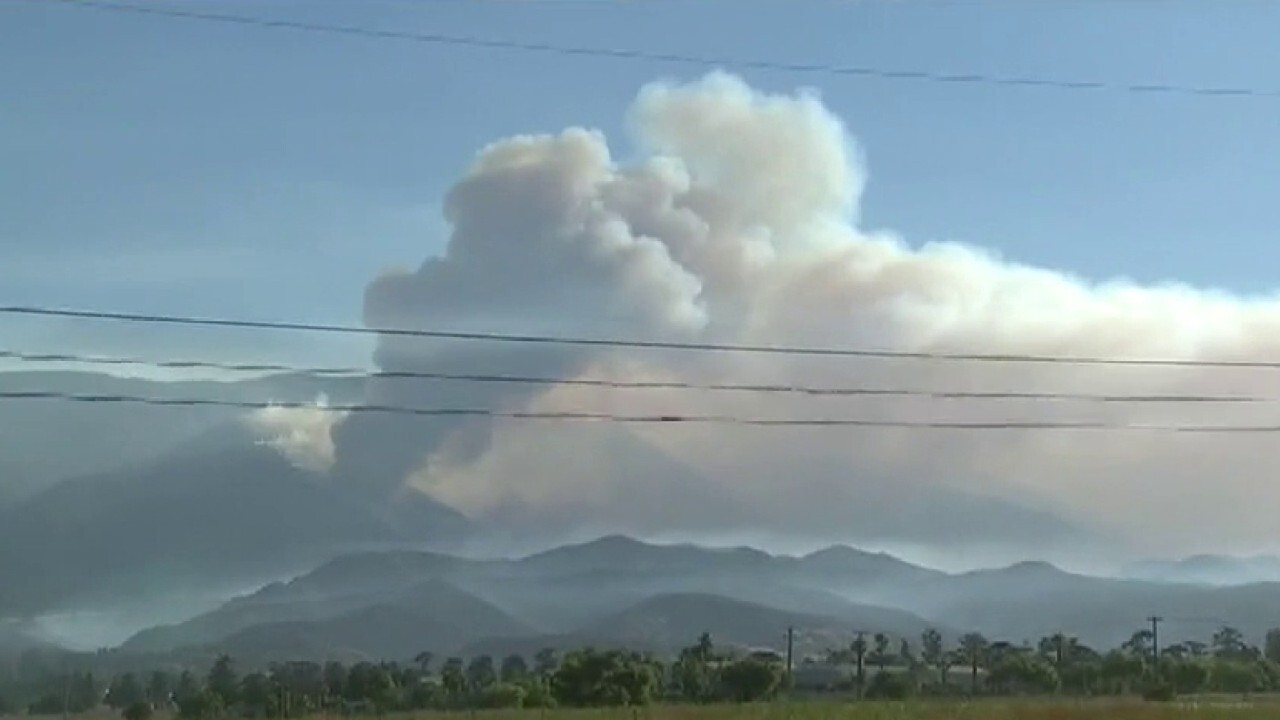 The American Red Cross has been assisting evacuees by putting them up in hotels, FOX11 reported.

Temperatures remain hot over the Southwest on Monday, reaching 110 degrees or more with excessive heat warnings in place.

Heat advisories are also up across the Great Basin where heat, dry and breezy conditions will bring fire danger to that area.