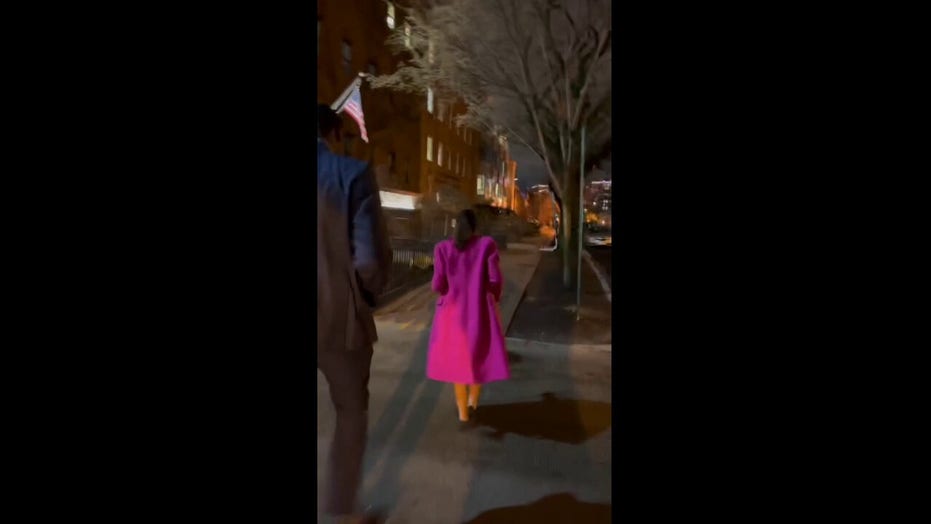 AOC walks away when asked about gas prices

In a video obtained by Fox News, Congresswoman Alexandria Ocasio-Cortez turns and walks away when asked about record high gas prices.

Alexandria Ocasio-Cortez refused to respond when asked what she would say to Americans who are facing record prices at the gas pump. In a video obtained by Fox News, the second-term congresswoman walked away when asked if she supported expanding U.S. energy production to help alleviate record-high gas prices.

In the video, Ocasio-Cortez ignored questions requesting her perspective on President Biden's sanctions against Russia, his administration's ban on Russian oil, as well the high cost of gasoline. Ocasio-Cortez continued walking after leaving dinner at Bullfeathers, a restaurant just across the street from the U.S. Capitol building, with her colleague Rep. Mondaire Jones.

Rep. Alexandria Ocasio-Cortez sits down to dinner with her colleague Rep. Mondaire Jones at Bullfeathers. (Used with Permission)

On Wednesday, the average price for a gallon of gasoline hit a record high for the second consecutive day, according to AAA.

AMERICANS REACT TO RECORD GAS PRICES: ‘YOU CAN RUN, BUT YOU CAN’T' HIDE FROM INFLATION'

Fox News' Hillary Vaughn spoke with Ocasio-Cortez on Tuesday about the Biden administration's ban on Russian oil. When asked if the U.S. should buy oil from Iran and Venezuela, Ocasio-Cortez said, "None of these options are good ones."

GAS CRISIS: ALASKA GOVERNOR SAYS ‘BIDEN IS SEARCHING FOR OIL ANYWHERE ON THE PLANET EXCEPT AT HOME’

"It's very alarming that many people are pushing to increase either imports or production of oil," Ocasio-Cortez continued. "What we really need to be doing is rapidly investing in solar and wind."

CORRECTION: This piece has been updated to reflect that Ocasio-Cortez was leaving dinner, not heading to it. We regret the error.