A middle school teacher-turned-Antifa leader was among the four people arrested after opposing political groups clashed Tuesday inside a so-called “empathy tent” at the University of California, Berkeley.

Tucker takes on national organizer for BAMN, which was one of the biggest supporters of the protests of Breitbart editor Milo Yiannopoulos's campus speech #Tucker

Yvonne Felarca, a 47-year-old teacher at Berkeley’s Martin Luther King Jr. Middle School, was charged with battery and resisting arrest after a scuffle broke out at rally held in response to student organizers canceling a planned “Free Speech Week” that would have featured right-wing firebrand Milo Yiannopoulous.

Three men were also arrested on charges including possession of body armor, carrying a banned weapon and participating in a riot.

The protest was led by Joey Gibson, leader of a group called Patriot Prayer.

The empathy tent was reportedly in place to offer protesters a calm place to unwind amid the chaos around them. But the tent ultimately offered little respite – and nearly toppled during clashes between conservative students and leftist activists, the Los Angeles Times reported.

“It’s tough, but we do what we can to foster dialogue,” said Edwin Fulch, who reportedly used the tent for talks about the virtues of meditation and the Occupy Wall Street movement. 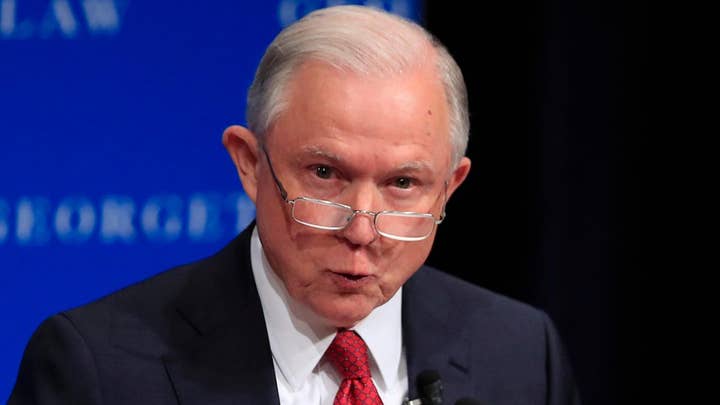 Felarca, who has been identified as the leader of the Antifa group By All Means Necessary, is also facing separate charges related to participating in a violent melee with white supremacists in Sacramento last year.

She was arrested in July and charged with inciting and participating in a riot and assault likely to cause great bodily injury.

Ahead of Tuesday’s event, Gibson posted a video on Facebook saying he wanted to bring attention to “disgusting things happening at Berkeley,” the birthplace of America’s free speech movement.

Berkeley's reputation as a liberal bastion has made it a flashpoint for the country's political divisions since the election of President Trump.

Four protests have turned violent on campus and in the surrounding streets in recent months, prompting authorities to tighten security as they struggle to balance free speech rights with preventing violence.

David Marquis, who identified himself as a senior at the school, said he was tired of the protests on campus. Marquis was outside the protest area and described the scene.

“If you look at them, it’s ridiculous,” Marquis told the Los Angeles Times. “You’ve got a guy with purple hair with a f---ing lightsaber talking about Hitler. It’s hard for me to take any of this seriously.”