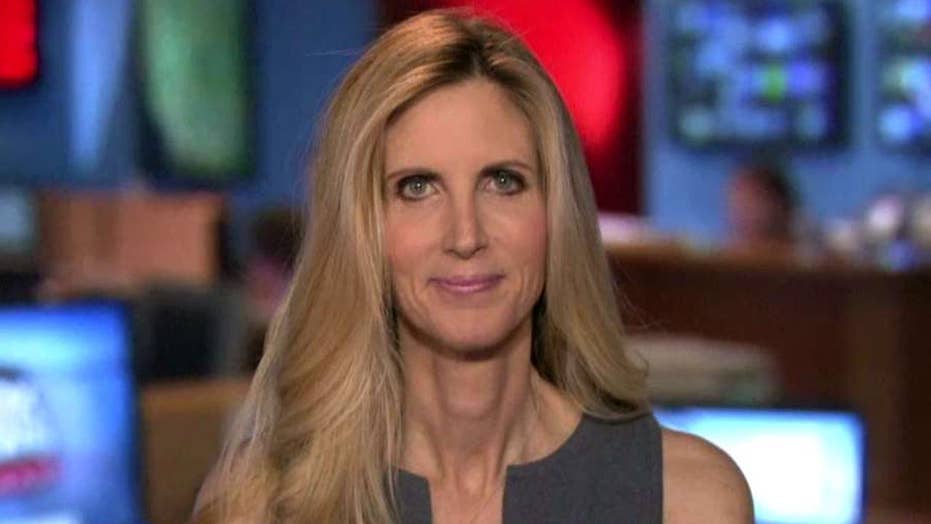 Coulter: I will give my speech, despite its cancellation

Author and commentator Ann Coulter sounds off on her scheduled speech at UC Berkeley being cancelled out of safety concerns, the latest incident where liberal protesters have prevented conservatives from exercising their First Amendment rights

Ann Coulter told Fox News the decision to nix her planned speaking event next week at the University of California, Berkeley, wouldn’t keep her from showing up.

"What are they going to do? Arrest me?" she asked Tucker Carlson on Wednesday night. "No, I am definitely giving the speech."

Earlier in the day, the conservative commentator tweeted, "I WILL BE SPEAKING NEXT THURSDAY," calling the move to cancel her planned event on April 27 a ban on free speech. Campus Republicans had invited Coulter to speak at Berkeley on the subject of illegal immigration.

The cancellation marked the latest skirmish in a free-speech fight involving conservative voices on college campuses across the country, including at Berkeley. In February, masked rioters at the school smashed windows, set fires and shut down an appearance by former Breitbart News editor Milo Yiannopoulos. Last week, the Berkeley College Republicans said threats of violence forced them to cancel a speech by writer David Horowitz. Writer Charles Murray's appearance at Middlebury saw riots last month, and Heather Mac Donald's speech at Claremont McKenna College was streamed online earlier this month after protesters blocked the door to the venue.

NY'S FREE-TUITION PROGRAM BLASTED BY BOTH RIGHT AND LEFT

Coulter said Berkeley gave her a long list of conditions before initially approving her speech, and she agreed to them. Still, the school canceled.

I am! At Berkeley next Thursday. https://t.co/SaOCFNRC7i

"I love Milo, but I'm not Milo. I'm a 12-time New York Times bestselling author," Coulter told "Tucker Carlson Tonight," saying she'd be talking about one of her most recent books. "I called their bluff, and they didn't have another reason to cancel me."

University officials sent the Berkeley College Republicans a letter Tuesday saying officials and campus police had determined they could not ensure the safety of Coulter, audience members or protesters expected at the event.

"We have been unable to find a safe and suitable venue," the letter from Vice Chancellor Scott Biddy and Vice Chancellor for Student Affairs Stephen Sutton read. "Given current active security threats, it is not possible to assure that the event could be held successfully."

University spokesman Dan Mogulof said campus police learned that some of the groups who appeared to be responsible for the violence last weekend and at the Yiannopoulos event "planned to target the appearance of Ann Coulter on campus." Last week, posters went up on campus threatening disruption of the event and chatter on various websites indicated the possibility of planned violence.

In its letter, the university said the students and officials could work together to reschedule the event for a later date. It noted that "most Mondays and Tuesdays in September during the day should work."