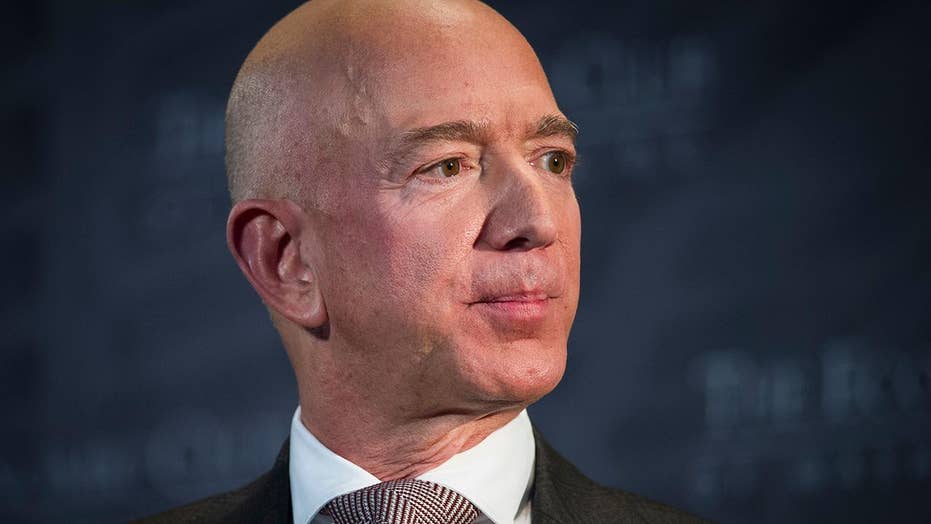 Jeff Bezos doubles down on support for Black Lives Matter

Protesters have set up a guillotine outside a Washington, D.C. complex where Amazon CEO Jeff Bezos purportedly resides, according to reports.

Several videos circulated on social media showing what resembled the apparatus known for beheading executions during the French Revolution in a residential area of the nation’s capital. A sign read: “Support our poor communities. Not our wealthy men.”

It was not immediately clear if Bezos was in D.C. this weekend.

His primary residence is in Washington state, where he founded what grew into the colossal e-commerce company in 1994. He is now one of the richest people in the world with a net worth around $160.8 billion, according to Forbes.

He also sometimes resides in an upscale Manhattan neighborhood popular among celebrities like Jennifer Lopez.

One video showed a female protester in D.C. with her face covered call out over a megaphone: “When they become threatened, and we have no voice, the knives come out.”

A digital flyer circulated online, titled “Abolish the present. Reconstruct our future,” named his D.C. complex and advertised an event there Sunday evening from 4-8 p.m.

“Amazon works directly with police to surveil us, stoking racist fears in the name of profit. Doubling down on their union-busting and mistreatment of workers, Amazon fired and racially slandered labor organizer Chris Smalls,” the message claimed. “Join us to tell Jeff Bezos enough is enough!”

“END THE ABUSE AND PROFITEERING. ABOLISH THE POLICE, THE PRISONS, AND AMAZON,” it concludes.

Smalls, an Amazon employee for five years, was fired earlier this year after reportedly organizing a work stoppage at the company’s warehouse on Staten Island, N.Y., to protest over a lack of personal protective equipment and hazard pay during the coronavirus pandemic, The Guardian reported.

Amazon said Smalls was fired for “violating social distancing guidelines and putting the safety of others at risk.”

Bezos said on Instagram earlier this month that he was “happy to lose” customers who did not support Black Lives Matter.

Amazon had joined the roster of companies demanding a reckoning with institutional racism following the death of George Floyd, a black man who died after a Minneapolis police officer kneeled on his neck while he was handcuffed.

In the days following Floyd's death, the company posted a note saying in part: "We believe Black lives matter. We stand in solidarity with our Black employees, customers, and partners, and are committed to helping build a country and a world where everyone can live with dignity and free from fear."

Bezos could testify before Congress as soon as this summer as the company faces antitrust scrutiny on Capitol Hill. He is one of the few Silicon Valley executives to not testify before Congress in recent years — Facebook CEO Mark Zuckerberg, Apple CEO Tim Cook and Google CEO Sundar Pichai have all been called to testify and made appearances.